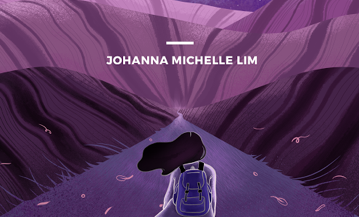 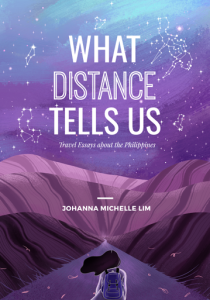 What Distance Tells Us, a book of travel essays about the Philippines, is not your usual travel guide. You will not find hotel numbers, tips for travel or even a suggested itinerary. Instead you will find the experiences that writer Johanna Michelle Lim has expertly woven into an exciting collection of essays about her travels through the archipelago of the Philippines, which contains more than 7,000 islands. In this collection, she travels great distances across the Philippines and paints vivid pictures of the places that she visits, whether travelling with others or going solo.

The book is divided into four sections, each representing a cardinal point of the compass, and the essays within each section are organised based on the relative position of the destination within the Philippines. All the main geographical divisions with the country are covered: Luzon in the north, the Visayas (both east and west) and Mindanao in the south. As someone who grew up at the centre of the Philippines, in Cebu, which Lim says is equidistant from all the other peripheries surrounding it, she finds herself in a situation that is “both liberating and cloistering.” Her experiences in growing up in the centre have also given her an insatiable desire to escape to the farthest points from the island of her birth.

Lim explains that “one has to understand extremities first in order to understand the relevance of the in-betweens,” which seems to be one of the main themes of this collection. By looking at the extremes of the Philippines—whether it is “the highest highway point,” in Atok’s Barangay Paoay, or the deepest point in the Philippine Trench, near Siargao, or the “northernmost province in the Philippine Archipelago,” Batanes, or the country’s southernmost municipality in Sitangkai—Lim moves toward the heart of the country. Her essays not only weave together the stories of the people she encounters in her travels, they are also intensely personal accounts.

The collection is a showcase for the writer’s fluid sense of identity. Lim realises that she can choose to be whatever she wants to be when she travels, and that such a strategy is effectively an “act of distancing.” She writes that “travel compartmentalises our several selves. The self shown in other worlds—with family, professional acquaintances, colleagues—is never the same face shown when displaced.” In What Distance Tells Us, we can see a form of self-portrait, in which the author is grappling with a “multi-layered, impermanent self, one that evolves and is shared to the world even before it is fully formed.”

Lim’s travel essays cast both personal and travel narratives in tense proximity with each other. In one essay chronicling a trip to Sabang, Palawan, with her then three-year-old daughter, Lim weaves the narrative of her journey to a subterranean river full of childhood memories of her mother and grandmother to the struggles she faces as a young mother. Her battle with vitiligo is interlaced with the story of Ricky, a-former-rock-and-roller-turned-vegetarian-yogi, who lives on Iloilo, and whose tattoos are contrasted with her own depigmented skin. Lim says that telling these and other stories, such as the story of Corporal Ramos, a Philippine marine whose duty it was to guard her during her trip to Sitangkai, is part of her purpose. They are as much tales of escaping, as they are tales of running towards something.

Another major theme in the collection is distance. Lim subtly reminds the reader of the distances of the remote islands relative to metropolitan areas, the distances between different locales and the distances between people in her narratives. She also ponders the idea of distancing, whether it is geographical distance, or what she calls the “interval between two points in time—the route from where I started this very act of estrangement, to my here and now.” In her writing, there is a sense of movement: travel in the physical sense and travel in the emotional sense of her personal growth and maturity.

With the advent of modern technology, such as smart phones, Google Maps, the Internet and GPS, Lim suggests that travel writing has become more of a struggle nowadays. It is becoming more and more difficult to get lost, and any form of displacement is seen as a form of contrivance. Lim concludes that “the only unexplored terrain is the terrain in the mind.” In that sense, her essays are perhaps one of the only ways that armchair travellers like myself can visit places such as the Philippines, and discover, through reading, just how much we have in common with people living in far-off places.

What Distance Tells Us offers an interesting take on travel writing, as well as on the need to escape, explore and take responsibility for ones storytelling. However, if you are a non-Filipino reader, there is sometimes a sense of distance between the reader and the characters in the essay, such as when Lim renders the dialogue, or a comment that someone makes, in a Filipino language. It is almost like watching a foreign film without subtitles: one can guess at the meaning based on the context, but without cues, subtitles or footnotes, it can be alienating. Nevertheless, the collection should be an interesting read for armchair tourists, or anyone who wishes to take a trip off the beaten path to the Philippines.

Goh Cheng Fai Zach was born in Ipoh, Malaysia, where he lived all his life before moving to Penang to study English Language and Literature at Universiti Sains Malaysia, where he received his BA. He then completed his MPhil at the University of Hong Kong, researching the representations of trauma and memory of the Japanese Occupation in 21st century Malaysian novels in English. Zach is currently a PhD student at the Department of Humanities and Creative Writing at Hong Kong Baptist University, and his research interests include Malaysian, Singaporean and Hong Kong literatures in English, as well as the literary representations of Chinese tea culture in overseas Chinese communities.