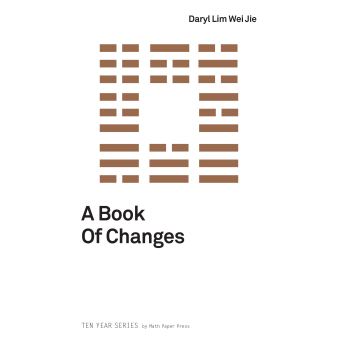 Meanwhile, what constructs Singapore? Daryl Lim Wei Jie’s first collection of poetry, A Book of Changes—part of Math Paper Press’s Ten Year Series—wrangles between the interface of history-poetry and navigates this liminal time-space. It questions how we construe Singaporean histories and identity, and more than that, emphasises the processual qualities of its constructions. The reader experiences a retreat to a historical jungle, navigates to our concrete one today, while considering individual aspirations by flipping through the book. The collection adds nuance to the state-driven narrative of kampong to high-rise that is the backbone of how we were taught to understand Singapore. For the present task at hand, reviewing a review of changes requires an angle, to which perhaps, would best be conveyed by following the positions that the speaker presents.

As a mode of framing, the multiplicity of the book’s Singapores is grounded by the narrator’s voice. In “Running by the Kallang River,” we follow the narrator saying:

and I am off, pounding the canal paths
in repeated arcs, opposed to winds.

The repeating arcs speak to two different conceptual registers found throughout the book: (1) the repetition of history and story arcs and (2) the everyday experience. Running along the Kallang River is an activity one can observe on any given evening when the sun is more forgiving, when Singaporeans find the need (and “time”) to workout, go for a stroll or train for the IPPT. It is something that Singaporeans find themselves engaging in, as part of their embodied lifestyles. At the same time, “we” are repeatedly told the same historical story arcs—of Sang Nila Utama, ancestral religions and the garden city logic that dominates our hard-won global city status—as opposed to embracing the nebulous winds. They shape the way we navigate life. The winds of time and change come, and the inevitable ebb of time sweeps through, yet they are instrumentalised for “perhaps a game chip / or some other wealth flowing from the Sands” (“Running by the Kallang River”). This is the Singapore that the narrator opens, engages and illuminates.

Assessment books are juxtaposed alongside manifesto in the Bras Basah bookshop (“Dreaming of the City of Books”). Likewise, this review will not reduce poetry nor change to categories nor dramatic text. Instead, let’s consider its positions. First, for the positionality of the reader: are we situated here as the citizens of Singapore or residents or observers? It seems to be a hybrid of these, as the narrator transitions between “I” and “we,” yet remains grounded in observing the rhythms of Singaporean life and history. “We” dare not claim the ideals that Adnan Saidi fought for during World War II (“Adnan”), yet “we” file paperwork for an invasion. (“Applying for an Invasion”). The reader is both student and perpetuator of history, who “wake[s] up damn shag” every morning (“Kangchu”).

Second “we” are shown around Singapore, as individuals navigating the streets. From Google, we notice Block 60’s symmetrical façade “still” interrupted by aircon units (“Art of Memory”). The “still” implies a continuity from the past in Pa’s 90s voice to the less certain twenty-first century town; it echoes how the man screaming at four yesterday will scream again today, like how the scent of belacan pervades the block in future. The past, present and future are blended together in a seamless walk through the neighbourhood, in a locale retaining its quirks, always on the verge of the en bloc threat. While we navigate Singaporean streets, we thus simultaneously navigate the interweaving of temporal fabrics, the past and future hauntings.

The third position is the space between overlapping scales of Southeast Asian and Singaporean histories. The Majapahit princess is evoked from the National Museum, bearing the “thick-lipped, eyes-unblinking, whiskers-bristling / snarling, all-devouring face of time” kala monster on her arm. Derived from the mythical being characteristic of Javanese temples, the poem situates Singapore’s “national” heritage within Southeast Asian history. There is no distinction here between the kala’s nationality nor the princess’s dominion, but it asserts the connected-ness of Singapore and Southeast Asian histories. It exposes the distinction between Singapore’s historical antecedent and aspirations as a contemporary global city.

But what is the everyday life of its global city? It is occupied by “thick generations / of the unwilling” sitting in the guardhouse, surrounded by years of dirt on the ceiling fan and Styrofoam cups with month-old Milo (“Guardhouse”). It leaves out names and streets like Kampong Soo Poo and Kampong Kuchai on the records, now only to be excavated by grandparents’ from their “sinking heap of memory” (“21 July 1964: IV”). The changes have been cemented, and yet still testify to the forgotten. Here, I bring together how the rain censors the civvy world (“Guardhouse”), blurring the stories of the Orang Kallang (“Running by the Kallang”). But at the same time, the rain leaves behind a shine and a gleam. Water that was used to lengthen breakfasts of rice (“21 July 1964: III”), is now an essential part of the air-con that can sometimes be a bit too cold (“First Day at Work”).

That leaves us in the process, in the in-between. The book presents the constancy of change and the inconstancy of that constancy. There is an entrenched narrative that tries to block out the past and futures of others, by its present. Here, the importance of the interstice is conveyed through the poems, in the transitions and movements between categories—the “meanwhile” we find ourselves in. The epistolary poem “To an Unknown Ancestor” remarks at the lack of memorials, prayers and goldfoiled castles “in world-bridging flame— / only the hint of a fingerprint / on worn walls of the temple.” With the everydayness of an ancestral practice, respecting the elders, he does not even possess an emotive memory nor knowing if there are truly any traces of him/her left on earth. Though what exists in the everyday is money. Couched in a similar imagination, “Coffeeshop” talks about how “Money, a gout-ridden demon” laughed when the poet’s cousins sold their kopitiam (and tai gong’s legacy) for eight million dollars. The reality of money is pit against ancestral legacy, again interweaving everyday life and religion. Here, in the in-between, we go on living and listening to the earth with “ears to gravel” and the “whiff of old urine” (“The Prophet”). In the midst of such constant change, we ironically make do by scrying in Styrofoam with muddy water (“The Prophet”).

In conclusion, it might be worth returning to the title of Changes. Words are static and yet it changes. From the moment we read the title and regard the book, it goes through permutations of meaning through our head and speech, and in that process, changes are constant and unequal. In this fashion, the book of fashion recalls the I-Ching, arguably the OG Book of Changes evoked by the cover’s hexagrams. The numerically-based divinations were linked to socially constructed meanings, like how the numbers that represent years past or the folklore of 4D continue to hold such weight in today’s Singapore. Meanwhile, “we” are positioned as citizens of Singapore in the interstice and everyday—navigating its streets daily, in between temporal and political trajectories, still waiting for our paycheck.

Al Lim is an Urban Studies major at Yale-NUS College. Part-Thai and part-Singaporean, he grew up in Sydney and South Carolina before returning to his home continent. His works have appeared in STAPLE Magazine, Harvard’s Tuesday Magazine, pressure gauge press, as well as anthologies like SingPoWriMo (Math Paper Press) and Twin Cities: An Anthology of Twin Cinema from Singapore and Hong Kong (Landmark Books).