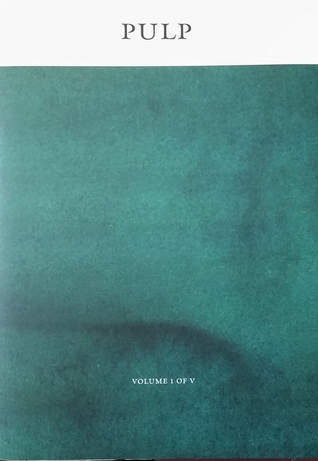 Shortlisted for the Singapore Literature Prize 2018 and a finalist of the Signature Art Prize 2018.

Printed in full colour and populated with pages of strangely assembled artefacts, Pulp: A Short Biography of the Banished Book Volume I of V was my desk side book for over a year. It was also an unduly heavy book that I carried to and fro on my daily commute. The crisp edges were worn down into soft curves. I loved the writing of the few sporadic pages I leafed through. I treated it as a reference manual when I needed new ideas or just the hefty weight of a book about books. The map inside the book’s dust jacket fascinated me for weeks, and “highlights a few especially egregious historical examples of libricide, especially as a corollary to genocide.”

After promising to write a review, I finally read Pulp.

For months I had treated it as an art object, a bit like a painting I could never grow tired of. Now, it felt odd to read it as a text from page to page. Rao’s book engages with a trail of found artefacts as diverse as Borges, Shakespeare, the Aztec Codex, natural history, a tree of lies and a Chinese Revolution papercut. The last page offers detailed remarks on the book’s design, specific notes on inks and typography and the unachieved replica of a shade of green that covered a childhood copy of Grimm’s Tales. 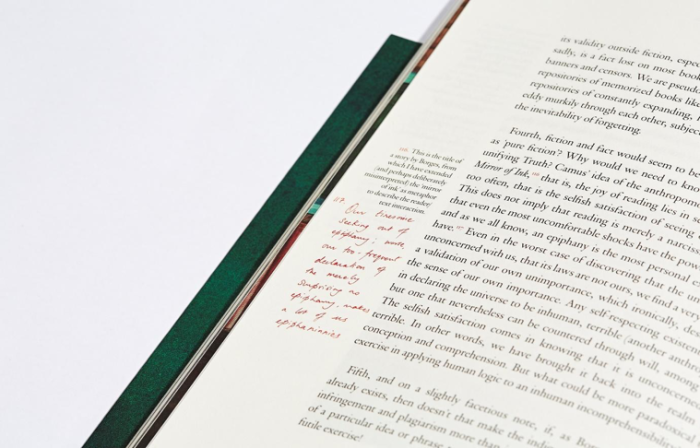 As the sections rambled on beautifully about banished books in a postmodern world and all the interactions that sustain the movement of ideas, I was struggling to find its logic. It seems to curate an artist’s process of collecting ideas—then it stops being about that. Online photos of Rao’s process work show an organised artist’s cluttered desk on exhibit. Following the genre of in situ artworks which replicate or become an evolving workspace, Pulp as a “finalised” object is stripped down to its parts. A collection of fragments for the collector-persona that she examines in the first section of five in this first volume of five books.

Rao’s artistic practice is focused on book making, and this book immerses the reader inside the spines and covers of a personal library of influences. The very form of this artwork-book itself is a tactile reminder of the banished book: a limited print run, the inevitability of its decay and the possibility of all this material returning to pulp.

Conscious of the materiality of the book, an argument is made for the difference that a seemingly outmoded form of communication still holds in the world:

Open access is the clarion call of every library that can afford it, and as they rush to digitise, we find the physical collection vanishing. The book, digitised, is only information. Closed, it is an artefact, a historical and personal document, a hushed tomb yes, but of breathless promise that comes alive when opened. Open and online, it is worthless. To scan a book effectively, you must slice its spine, break its back, unpick its binding, unmake it into separate pulpable sheets, flatten its text into a poor image, a pale shadow.

The commonplace (and occasionally whiny) desire for the feel of a physical book takes on more dimensions when touched by an expert who handles them. Curiously enough, the digitised images of numerous artefacts (most of them books) which are the elements that add life to Rao’s work. Pages of high quality images, stills from films, scans from ancient texts and salvaged fragments of books are accessed through the medium of yet another slowly deteriorating book. Unable to make this specific journey taken through the world of books, the author-curator has become a guide through this landscape.

Rao’s work is part of an ongoing trend of nonfictional works which blend elements of autobiographical accounts, lyric essays and rigorously researched theoretical musings. Defined occasionally as autotheory, the personal voice and its seemingly haphazardly diverse interests are given the space to romp and communicate. The Mushroom at the End of the World: On the Possibility of Life in Capitalist Ruins by Anna Lowenhaupt Tsing occupies a more conservative end of the spectrum that could still be shelved next to Claude Levi-Strauss. Flâneuse: Women Walk the City in Paris, New York, Tokyo, Venice, and London by Lauren Elkin could be labelled a travelogue, but it also deals with the psychological reality of the person moving through space. The musings of The Art of the Wasted Day by Patricia Hampl follow a similar style. That is, until the personal accounts overwhelm biographies of cities and great thinkers and the reader is left with raw human emotions that form the psychological core of these texts.

Pulp is introduced with an account of how the once-shared eclectic library of Rao’s divorced parents vanished in the Eastern Himalaya upon her father’s death. Stemming from a childhood that cultivated her reading habits, her practice becomes a professional role that mediates the masses of archives and ideas for observers who do not understand the language, the times, the places and ideologies of each artefact.

Given the vast expanse covered over the time and space by the history of the banished book, a list of its contents would seem daunting. Carefully managing the content, Rao allows the reader to find comfortable relief in the knowledgeable asides and historical anecdotes which are liberally littered through this text. The footnotes occupy the margins with a chatty demeanour. A red cursive script asserts its legitimacy as an annotation, numbered in the same order as the formal, research-grade notes: “174. Harry Potter promotes witchcraft!” Juxtaposed against this seemingly light-hearted joke scrawled in a margin is the factual heaviness of burning censorship of text and bodies by ancient to contemporary regimes. This ability to traverse registers, tones and thoughts, is a form of fluid power that the artist can claim through the act of writing in the margins of genres.

The expectation of an almost insular specialisation of professional intellectual works, and by extension creative works, is resisted by the simultaneously strictly structured and freely flitting ideas of Pulp. After trawling through a plethora of texts and references, the book still humbly argues:

We are impoverished. We are a fraction of ourselves. We know a millionth of that fraction. And still we burn … The list should end here, but it will not. It does not belong to our past, it is present, it is continuous, it is the charred carbon on which we continue to write our similar histories.

On my bookshelves, there was no real resting place for its genre. I finally conceded defeat and found the book a good-enough home between The Familiar, Volume 1: One Rainy Day in May by Mark Z. Danielewski and Nick Sousanis’ Unflattening.

Sometime soon, Volume II of V is expected to be published, according to the timeline of a volume every two years. Pulp is deliberately crafted as an open-ended, on-going text with an online afterlife and separate strands in Rao’s artistic work. Instead of demanding a conscientious read from cover to cover, it offers the space for an audience to dip in and out of its pages over the years.

Anna Onni is a teacher, writer, and illustrator who lives in Singapore. She has a degree in English Literature from the National University of Singapore. Fascinated by the obsessions and routines of daily life, she is currently writing fictional prose and researching the possibilities of curative art-making habits. Her illustrations can be found on her website.