{Written by Sandro Lau, this review is part of Issue 41 (September 2018) of Cha.} {Return to Cha Review of Books and Films.} 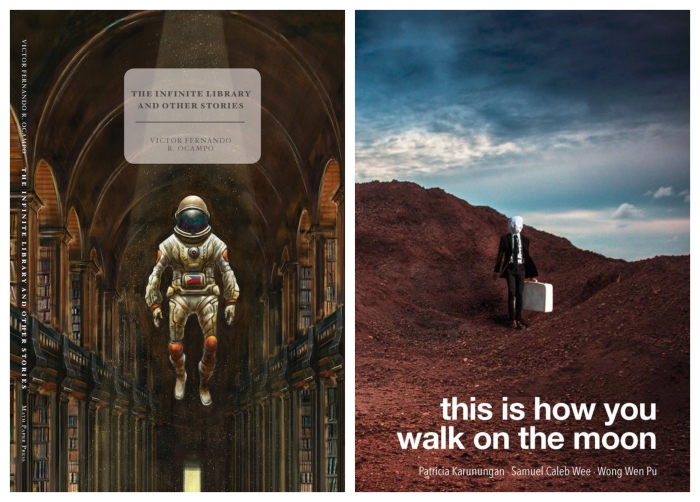 The Infinite Library and This is How You Walk on the Moon are both anthologies of short stories that attempt to push the boundaries of genre and language and to explore contemporary experimental and speculative fiction. These books map the value, the pain and the scarcity of human connection in diverse, yet equally remarkable ways.

The Infinite Library and Other Stories is a collection written by Victor Fernando R. Ocampo, comprising seventeen short stories. His anthology begins in a historical setting, progresses to contemporary times and ends with stories that ply into the future. However, what is most striking is that these stories form a continuum of the Filipino diaspora from history into a hopeful future, investigating how separation has affected its members, and how in they turn have affected their host communities. This creates a deep and lingering connection between all the stories in the collection, through aspects of religion, language, time, and literature. The stories explore themes that are as relevant to those in the nineteenth century as they are to us today—choosing between tradition and progress; the struggle of maintaining a connection with one’s homeland; the importance of freedom; the impact of literature and language. The Infinite Library makes for an undemanding, yet thought-provoking read, especially for those interested in speculative fiction.

This is How You Walk on the Moon is an anthology compiled by Patricia Karunungan, Samuel Caleb Wee and Wong Wen Pu. It comprises twenty-five short stories, divided into three sections. To quote the somewhat pretentious Foreword:

Rather than explain how we differentiated these stories, here are three images for you to interpret at your own leisure (or risk):

Section One is foreplay.
Section Two is a gimp suit.
Section Three is a post-coital cuddle.

There are various themes that are addressed throughout the collection, including the difficulties of coming of age, the unanticipated relationship between events and outcomes, the relativity and infiniteness of realities, the subjectivity of literature and more. However, what seems to connect these stories is more their takes on forms of literature as experimental fiction. These stories attempt to rethink how literature should be written—from unending walls of words (“The Telescope Man” and “Because we must begin somewhere”), to the cryptic, almost mantra-like (“The Anti-Art Puzzle Box Starring Diogenes of Sinope”). This novel take on literature also continues through unconventional protagonists—from a prisoner accused of sexual crimes (“Gollum’s Demon”), to an exploration of the mind (“An Experiment in Moderation” or “The Girl Who Ate The Photocopier”).

The struggle between tradition, religion and modernity is of paramount importance throughout The Infinite Library and Other Stories. Religion is shown to be both a blessing and a bane to Filipino society, while modernity is not always the progress it promotes itself to be. In the first story, “Mene, Thecel, Phares,” set in Berlin, the protagonist is faced with integrating into a foreign society, while simultaneously being emotionally pulled back to the Philippines to fight for freedom. In “Synchronicity,” the protagonist finds himself stranded after an accident, then on a bus with a priest, journeying to the Infinite Library. This journey becomes one of religious significance, yet it is the protagonist who seeks help through prayer and the saints, while it is the priest who remains rational. This twist further seems to emphasise the duality of both sides— religion and rationality. The importance of subverting traditional gender roles is explored—a father disapproves of his son for creating figures out of nanotech clay, a job he sees as feminine: “creation is a woman’s work … that’s why real guys don’t get pregnant. You should have been a pilot or midshipman.” In the end, the importance of creation is finally acknowledged, but only after a great struggle.

Stories in The Infinite Library are skilfully injected with snippets of Tagalog, Singlish, Malay, German and other languages, often left untranslated, resulting not only in a separation between readers who can understand and those who cannot, but also in the emphasis of a linkage between subjects and their culture, despite distance and integration.

In “Big Enough for the Entire Universe,” residents of Bukit Batok are interrogated in Bukit Gombak Military Installation about the appearance of a giant mass of nanobots, that slowly assimilates all in its path and rebuilds them. Here there is an exploration of what language is and its importance in our lives. Setting this story in Singapore further emphasises this, as evidenced by the multitude of languages that permeate the text—Hokkien (“wah lao“), Malay (“pasar malam“), Arabic (“Inna lillahi wa inna ilahi raji’un“) and of course Singlish (“blur like sotong; correct or not?”). These diverse languages also speak to the different cultures that call Singapore home. The importance of this linguistic diversity is highlighted especially because of the mass that threatens to destroy them all. The mass is a further juxtaposition of these languages, as it is revealed that it began as “an algorithm for the soul,” and that the creator believed that “math was just a language, and that an algorithm was just like any piece of text.”

Arguably the most playful of these stories in terms of linguistic form is “I M D 1 IN 10,” which reads like a manifesto yet is written in a cryptic mixture of internet vocabulary and shorthand. At the end, it emphasises the strength of the connection between the protagonist and his homeland, even when separated from a physical body; that the strength of one’s cultural identity is irremovable until death: “B4 uploading to d New City, my ethnicity was PINOY. My ancestors used 2 greet each other w/ d phrase ‘Mabuhay ka!’ which sadly, no 1 ever uses anymore.”

Finally, the importance of literature, as a vessel of cultural history and of change, is not lost amongst all these stories. Almost every story alludes to an Infinite Library, wherein all works of literature are contained. Some venture into it, others dream about it and those in the future hope for it—whether contemporarily (“Synchronicity”), in space looking back at the “radioactive ruins of our poor, destroyed world” (“Resurrection 2.0”) or in a ship far from earth, “for the ancient heretics that had worshipped libraries” (“Blessed Are The Hungry”).

Stories in This is How You Walk on the Moon show different takes of the same issues that confront contemporary society—the connectivity (or a lack thereof) between people, and the curious, sometimes serendipitous, sometimes unfortunate nature of forming them. They work to interrupt comfortable realities—not only of the characters within the stories, but also the reader’s expectations of how a story should be told and structured. The creativity of some of the stories within this anthology is a testament to Singapore’s blooming arts scene.

In the first story, “Spaceship,” there comes a moment when a security guard’s comfortable reality is broken, when a lady walks into his security booth. In “The Ostrich of Kampong Glam,” the protagonist appears to create what he believes is the reality of the escaped ostrich that he was charged with tracking down. “面子” is an uncanny tale of a young girl’s confrontation with her “ethnic identity,” which in her mind, manifests as a very physical entity. The spell is broken when a traumatising act is carried out on the protagonist, leading her to realise that her reality, living with Mian Zi, was never truly real. All these stories also explore the rarity of human connectivity: Spaceship‘s protagonist is a lonely security guard; “The Ostrich of Kampong Glam” shows how the car crash that lead to the ostrich’s escapes brings a relationship back together; “面子” expresses the burden of connectivity.

“Nesting in the Crevice of a Human Ribcage” interrupts the comfortable reality of human existence through the perspective of a star named Ne: “Humans lived and died in a blink, too short for any consequence, leaving no imprint. Stars do not see the point of sparing any attention to humans.” This story turns the usual conventions of star-gazing around, and humans become the object of observation, of “passive human-gazing.” This story calmly and cleverly approaches the transient and fragile nature of human life, without coming off as ostentatious, and seeks to impress upon the reader the importance of acknowledging one’s impermanence. Ne comes to envy humans in the comfortable bubble they live in: “Humans live with such bravado, such carelessness, such nonchalance. Such arrogance in the face of their temporality,” inevitably questioning whether such an existence is better than one that lasts an eternity.

“An Experiment in Moderation, or The Girl Who Ate The Photocopier” is an interesting take on a story from multiple perspectives—those who control the projection and simulation, and the perspective of the “male specimen” that is under their control. Here the reader is confronted with questions about free will, about what truly controls us and how we all live in our own separate realities.

“Don’t Die Before I Do” takes the form of a report comprising of multiple appendices. This novel take on storytelling lends itself well to speculative fiction—the tale becomes much more gripping when presented in this way. The report format is used to great effect to foreshadow and maintain suspense, pulling away from what would normally just be a dull chronicle of events. The story follows an employee of the Hallerian Foundation, where humans are designated numbers instead of names, and are required to keep masks on at all times. Stripped of original identity, and of being able to identify each other apart from their masks, the story takes on a distinctly eerie tone. The clinical nature of this foundation is furthered through the report format—especially when the sentiment “the Hallerian Foundation is nothing without you!” is repeatedly expressed. Contemporarily, the report format sits very well—it is as if the reader is going through clues left behind after some apocalyptic event, just as one would in a video game.

Finally, “Weapons of Mass Destruction” seems at once out of place in this anthology—a story that “we just chose for the blow job” (Foreword). Even when the importance of said sexual act is revealed, as it caused the receiver to accidentally press keys that would destroy the world’s economy and cause devastation to millions, perhaps alluding to how an unfortunate series of events can suddenly occur, it does seem like quite a stretch.

The Infinite Library and This is How You Walk on the Moon are contemporary anthologies that capture the zeitgeist of their own communities—the Filipino diaspora and the various cultures of Singapore respectively—through the medium of speculative and experimental literature. Where The Infinite Library is an exploration into a diaspora across all of time, and its infinite connection to the homeland, This is How You Walk on the Moon examines the intense and diverse connections we make, while pushing the boundaries of contemporary literary form. 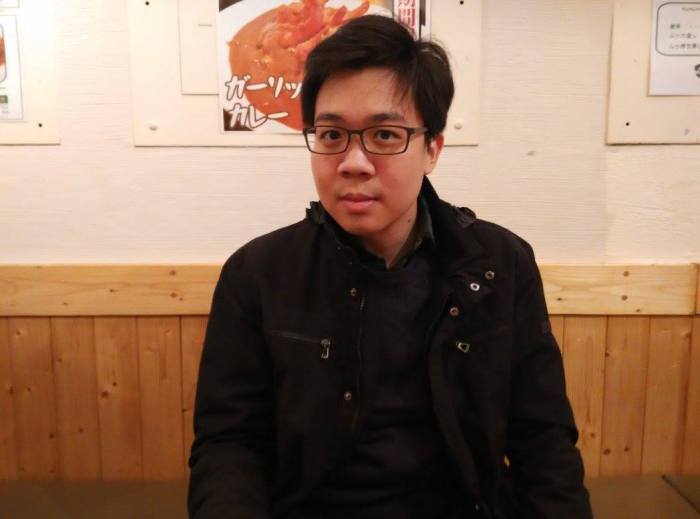 Sandro Lau, born and raised in Hong Kong to a local father and Italian mother, is currently working towards a PhD in English Literary Studies at the Chinese University of Hong Kong. He received his BSSc in Architecture and MA in English Literary Studies at the same university. His major interest is speculative fiction, and his personal interests include learning about languages and cultures.