➑➒➏➍
[Return to Table of Contents.]

I indulge myself
In rich refusals
Nothing suffices.
I hone myself to
This edge. Asleep, I
Am a horizon.

Milan Kundera’s The Book of Laughter and Forgetting (excerpts)

After the Russians arrived, he refused to renounce his convictions, was removed from his job and hounded by the secret police. That didn’t break him. He was in love with his destiny, and even his march toward ruin seemed noble and beautiful to him. Please understand me: I said he was in love with his destiny, not with himself. These are two entirely different things. […] Destiny has no intention of lifting a finger for Mirek (for his happiness, his security, his good spirits, his health), whereas Mirek is ready to do everything for his destiny (for its grandeur, its clarity, its beauty, its style, its intelligible meaning). He felt responsible for his destiny, but his destiny did not feel responsible for him.

The future is only an indifferent void no one cares about, but the past is filled with life, and its countenance is irritating, repellant, wounding, to the point that we destroy or repaint it. We want to be the masters of the future only for the power to change the past. We fight for access to the labs where we can retouch photos and rewrite biographies and history.

Just as someone in pain is linked by his groans to the present moment (and is entirely outside past and future), so someone bursting out in such ecstatic laughter is without memory and without desire.

All churches, all underwear manufacturers, all generals, all political parties, are in agreement about that kind of laughter, and all of them rush to put the image of the two laughing runners on the billboards advertising their religion, their products, their ideology, their nation, their sex, their dishwashing powder.

To see the devil as a partisan of Evil and an angel as a warrior on the side of Good is to accept the demagogy of the angels. Things are of course more complicated than that.

Things deprived suddenly of their supposed meaning, of the place assigned to them in the so-called order of things (a Moscow-trained Marxist believing in horoscopes), make us laugh. In origin, laughter is thus of the devil’s domain. It has something malicious about it (things suddenly turning out different from what they pretended to be), but to some extent also a beneficent relief (things are less weighty than they appeared to be, letting us live more freely, no longer oppressing us with their austere seriousness).

If you go away from a row, you can still come back into it. A row is an open formation. But a circle closes up, and if you go away from it, there is no way back. It is not by chance that the planets move in circles and that a rock coming loose from one of them goes inexorably away, carried off by centrifugal force. Like a meteorite broken off from a planet, I left the circle and have not yet stopped falling.’ 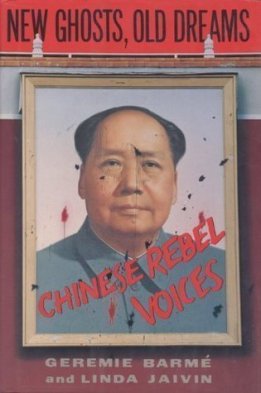 From the section of the book entitled “Bindings”

The following is a comment by Feng Jicai regarding his short story “Fragrant Lotus” about foot binding.

I’m not really writing about feet at all. I’m using them as a symbol for our cultural psychology. And it would be a misinterpretation to say I approve of foot binding, for I’ve written of the agony and grotesqueness of it, Chinese women have bound their feet for a thousand years. Why? It’s not as if they were forced into it, for women did it to themselves and even deemed it attractive. That’s what I’m writing about….

There’s something very potent about Chinese culture; it turns restrictions and taboos into immutable and acceptable rules. If they were just taboos, the Chinese could easily be rid of them. Even today, the greatest obstacle to Reform is that the old ways have been turned into Sacred Truth, and this cloud’s people’s judgment, they assume it is right and proper. The moment you liberate them they feel uneasy and oppose their freedom. When feet are unbound people fight against it heart and soul; they can’t walk with unbound feet anymore. It’s not just that the feet have been bound too long; they have become their own raison d’etre, a self-regulation that has also become an esthetic in its own right, a value system…

The reason Reform is making such slow headway is that people don’t dare let go of all those things they once found attractive. Release their feet today, and tomorrow they will bind them up again. Release is capitalism, liberalization. I’ve observed overall problems of the society, so I’m not writing about one factory manager who opposes it. In my opinion, it’s a question of the culture as a whole. I’ve found a symbol through which I can analyze the culture. That symbol is the bound foot; it reveals the characteristics of the culture.

From the section of the book entitled “Wheels”

Widely recognized as modern China’s preeminent man of letters, Lu Xun (1881–1936) is revered as the voice of a nation’s conscience, a writer comparable to Shakespeare and Tolstoy in stature and influence.  Lu Xun was never a Communist, but he has been used to support the CCP after his death. However Lu Xun was an opponent of despotism, for whom empathy, not ideological zeal, was the key to achieving revolutionary ends.

In a long prose meditation on the enigmatic smile of the terra-cotta warriors interred at the tomb of Qin Shihuang near Xi’an, published in 1990, one writer speculated on the reasons for the frozen bemusement of the statues in a thinly disguised comment on China’s modern rulers:

They smile at the collapse and extinction: the proud Empire of Qin was brought low in an instant.

They smile at the greed and ambition of an emperor who, having schemed to enjoy an eternal reputation, was doomed to a short lived reign.

They smile at feebleness and impotence: History reveals that there has never been an emperor capable of enslaving his people forever.

They smile, contemplating these fly-by-nights who believe they are the masters of history, and who do not realize that by forcing the people to bow their heads in submission, they become objects of scorn.

Jennifer Eagleton, a Hong Kong resident since October 1997, is a committee member of the Hong Kong Democratic Foundation and a Civic Party member. She has been a close observer of Hong Kong politics since her arrival in the city. She was an adviser to the University of Hong Kong’s “Designing Democracy Hong Kong” project (2011-2013), and in 2012 completed a PhD on how Hong Kong talks about democracy using metaphor. Jennifer has written a number of language-related articles for Hong Kong Free Press and is currently compiling a book combining Hong Kong culture, photography, and political metaphor. A previous president of the Hong Kong Women in Publishing Society, Jennifer is also a part-time tutor of stylistics/discourse analysis at the Open University of Hong Kong as well as a freelance writer, researcher, and editor on cultural topics. In her spare time she collects Hong Kong political pamphlets and artefacts.