{Written by Kathy Yanbin Cai, this review is part of Issue 44 (June/July 2019) of Cha.} {Return to Cha Review of Books and Films.} 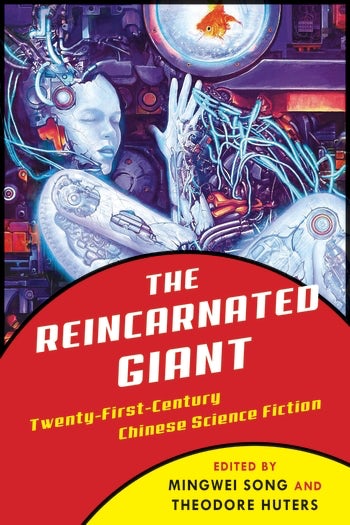 Recently, I have been noticing more discussion of Chinese science fiction. I attended a symposium on modern science fiction and couldn’t’ help but notice how often Cixin Liu’s The Three-Body Problem popped up in discussion. A few months later, I took my daughter to see Frant Gwo’s The Wandering Earth in cinema. And a few days after that, I picked up The Reincarnated Giant: An Anthology of Twenty-First Century Chinese Science Fiction, in which I read that a Chinese new-wave, as Song Mingwei says in the introduction to this new anthology, seems to be rising in the realm of science fiction in both audio-visual form and textual translation.

Over the past few years, Chinese science fiction has been gaining more attention among an international readership, with Liu Cixin’s touching down in the U.S. in 2014, and later with Hao Jingfang’s Folding Beijing winning the Hugo Award for best novelette in 2016. Ken Liu, their shared translator, has successfully created thriving prospects for contemporary Chinese science fiction in foreign lands. It is indeed fortunate for Chinese sci-fi writers to find an international spokesman in Ken Liu, but one translator, no matter how talented and devoted, can open only a narrow window for a genre that “has become a fresh new force that is helping shape the outlook of global science fiction.” The Reincarnated Giant, complied by Song Mingwei and Theodore Huters, comes as a timely and much needed addition to Chinese sci-fi literature in translation, presenting a wide range of writers from Mainland China, Hong Kong and Taiwan, with their works rendered into English by “academics and translators whose work is not usually limited to science fiction.” This taster of the variety of Chinese sci-fi works is certainly welcome progress for the genre to find its place in world literature.

Song’s introduction contextualises the new-wave of Chinese science fiction, a trend which started around the turn of the twenty-first century and has developed into a scene featuring a vast number of writers and works of distinctive styles. I find his analysis of the dual nature of these works most insightful when he states that contemporary Chinese science fiction “may have simultaneously arrived at its new golden age and generated a new-wave subversion of the genre itself.” Works of the new-wave are “marked by a dystopian vision of China’s future, ambiguous moral dilemmas and sophisticated representations of the power of technology or the technology of power.” This vision has obviously affected the compilation of the anthology, with fifteen stories and excerpts from novels presenting glimpses of the “Other(s)” to a Chinese reality that centres on economic development, technological advancement and the general idea of a “Chinese dream.” Organised in three parts, the selected works represent the “darker, more invisible sides” in Chinese sci-fi, while these traits make “the genre alive, attractive and provocative in a worldwide context.”

Wang Jingkang’s “The Reincarnated Giant,” the story from which the anthology gets its title, is representative of these darker sides. It was originally published under a pseudonym, being an exception to Wang’s usual “utopian impulse for a hopeful future.” In it, a tycoon of the J-nation intends to be “rebooted” by having his brain surgically transplanted into a new-born baby, or by his thinking, having the baby’s body transplanted to his brain. His greed is so overwhelming that the new body reacts by growing into a giant, and the ever-growing process finally kills the tycoon with his own weight. The story is often read as a sceptical response to the desire for GDP growth in China during the years of reform and opening-up, but Wang keeps his distance by setting the story in a fictional J-nation, which alludes to Japan, China’s neighbouring competitor. Meanwhile, “The Reincarnated Giant” employs word play with homophones that can only be understood in the Chinese language, creating a cultural connection in which the irony can be made manifest. The characters are given fake Japanese names, such as Jinbei Wuyan(今貝無彥) for the protagonist, and Junzhi Renqian(君直任前)for the personal lawyer. In Carlos Rojas’ translation, the names are respectively rendered as Imagai Nashihiko and Kiminao Ninzen, but these Japanese pronunciations do not carry the implied meanings of the original Chinese, where the homophones Jinbei Wuyan implies “the whale’s baby has endless greed” and Junzhi Renqian has the meaning of “the person only sees money.” In translation, Rojas finds other methods to compensate for the lost satire of the word play. The one tactic I respecially appreciated was the multiple appearances of the word “great,” which effectively recreates Wang’s dark humour in an English context: “What organ, therefore, was the great Mr. Imagai going to receive from the anencephalic infant?” (那麼，今貝先生究竟要從無腦兒身上接受什麼器官呢？)

“The Reincarnated Giant” starts with a description of Mr. Imagai as “a great man who comes along only once every few centuries, like Tang-dynasty China’s Taizong emperor.” Wang later refers to the protagonist simply with his last name, but Rojas adds “the great” more than once while addressing the man, the irony becoming more apparent with the repetition. The translator also takes full advantage of the various meanings of the word “great”; for instance, Part 4 of the story is entitled “Sudden Greatness,” with “Jubian” (劇變), the original title, literally meaning “sudden and great change.” In this part Mr. Imagai faces a sudden change when his body grows so big that his doctor has to transfer him to a location in the Pacific and substitutes the human wet nurses with female whales. The reincarnated giant baby does not achieve anything worth admiring or looking up to, other than growing into “the largest and greatest person that had ever lived”: “great” here pointing only to his physical size. Such cacophony certainly brings out Wang’s style in translation, and the novella sets the tone for the whole anthology.

An expansion of a double issue of the Chinese literature journal Renditions from 2012, the new anthology has collected all the works by contemporary sci-fi writers from that special issue, and incorporated three more pieces written by authors from Mainland China, Hong Kong and Taiwan. Taken together, these pieces present the Chinese new-wave in a more comprehensive context, as well as in a variety of forms. Among the three additions, Lo Yi-Chin’s “Science Fiction: A Chapter of Daughter” and Dung Kai-cheung’s “Histories of Time: The Lustre of Mute Porcelain” are both excerpts that are not meant to be read as independent tales. “Histories of Time” was also translated into English by Rojas, whose representation of “The Reincarnated Giant” successfully recreates Wang Jingkang’s style in English. With Dung’s work, the translator does not provide readers with coherent chapters as Cara Healey does with Egoyan Zheng’s The Dream Devourer; instead, he presents the different narrative modes in Dung’s original by choosing the preface, an excerpt from Chapter 1 and an excerpt from Chapter 7. This rendering opens an inviting gateway to Dung’s sophisticated Natural History Trilogy, and I started searching for Dung’s work right after I finished reading the excerpts. This is, I would expect, part of the intended effect not only for Rojas’ translation, but for the anthology as a whole.

The third addition to the anthology is Bao Shu’s “Songs of Ancient Earth,” a story I enjoyed immensely. In this space opera set in the distant future, the spaceship Blizzard finds on the only planet orbiting Alpha Orionis the remains of another ship, Starsong. The crew gradually unearths the secrets of a fallen civilization that had travelled six hundred and fifty light-years from Earth, and decodes the mysterious songs that the Starsong people held in awe, an endeavour which unexpectedly leads to the demise of the Blizzard crew, and possibly to all civilization in the universe. Bao Shu is always adept in constructing stories against the vast background of the universe, and Red Songs from a mythical China creates a fictional cultural shock that is almost comical. “Songs of Ancient Earth” in translation creates a mode of reading independent from its original, when the distance between the English language and the Chinese revolutionary songs in the story produces an almost exotic experience when the Blizzard crew hears the alien tones sung by nanomachines, an effect not so evident in the original Chinese text. The crew listen to and even sing the Red Songs, but they do so without a shred of understanding, as the songs are not only from a fallen civilization, but also from a nation that has faded into myth. Bao Shu attempts this alienation in his original by changing the lyrics, producing parodies of revolutionary songs that many Chinese people, myself included, know by heart,

A straightforward rendition would possibly produce “flag of stars” for 星辰之旗幟, and “Red Square” (紅場) apparently points to a place outside of China, but Adrian Thieret restores the lyrics of the original version of the song, ” Sing for My Country” (歌唱祖國), in his translation.

Although we do not understand its meaning, we were nonetheless all affected by the song:

The five-starred red flag waving in the wind
Victory songs so brightly ringing
Singing for our beloved country
Starting down the road to strength and prosperity.

The restoration of Bao Shu’s parody works well in translation, when readers who are often strangers to the Red Songs feel the alienation, but are still able to connect to a more familiar image of China, especially with the translator’s notes explaining their sources as revolutionary songs. Somehow my closeness to the lyrics prevented me from fully experiencing this alienation, and I almost hope to see the stanza left in transliteration, the distances between languages, time and worlds kept and emphasised in an act of non-translation.

Works in this analogy are coherent and focused, the dystopian point of view recurring when efforts to “bring back,” “regenerate” or “reincarnate” often lead to an even bleaker future. What I also find interesting is an implied “Other” to this representation of Chinese science fiction. The cover art for The Reincarnated Giant first appeared in an old issue of Science Fiction World, the sci-fi magazine with the largest circulation in Mainland China, and it also served as the illustration for another story written by Bao Shu, entitled “Daughter of the Sea.” As far as I know, that story has not yet seen an English rendition. Alluding to Has Christian Andersen’s fairy tale, “Daughter of the Sea,” Bao Shu’s nanobot-mermaid chooses to disintegrate into bubbles to foster a new round of evolution on Earth after humanity dies out. For me, the selection of this artwork seems to hint at the wide diversity of contemporary Chinese science fiction, which cannot be completely covered by one volume. There is always hope for more to come. 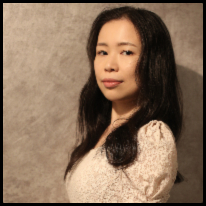 Kathy Yanbin Cai is a recent PhD graduate from the University of Hong Kong. Her research interests include translation studies, world literature, pre-modern Chinese novel, and Chinese science fiction. During her leisure time, she writes fiction, and translate English fiction into Chinese.