{Written by Matt Turner, this review is part of Issue 46 (March/April 2020) of Cha.} {Return to Cha Review of Books and Films.} 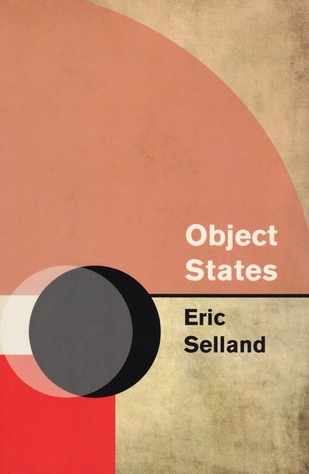 Eric Selland, the author of Object States and five earlier books of poetry, is American, but he is also a long-term resident of Japan. In addition, he is a translator, probably best known for his translation of Takashi Hiraide’s surprise hit The Guest Cat.

Selland’s own work—written in English—is composed in a primarily non-English speaking environment. It is also published by small presses with limited distribution. In the case of Object States, the book has as slight a market presence as it is slim, at 60 pages of text. Composed of a series of brief, untitled prose poems, each gives only partial glimpses of scenes and information and appears incomplete without considering what came before as well as after. Context lives in the margins in the same way that it is published at the margins and its author lives at another margin.

This technique he uses is similar to the extended narrative of prose fiction—a technique not particularly common in contemporary American poetry (with notable recent exceptions, for example Claudia Rankine’s Citizen)—and calls into question the discrete quality of the prose poems; his narrative builds through fragments, descriptions or the elaboration of themes spread out over multiple pages. For a technically similar comparison, look to musical compositions which develop dramatic movement through repetition and subtle change, like Philip Glass’s piano études or even the choral arrangements of John Dunstable, which proceed at irregular intervals in order to accommodate source texts. Dunstable’s compositions also set content into polyphonic arrangements—allowing for tonal accents similar in feeling to a number of the prose poems in Object States.

Because of the extended narrative, one last comparison would be early narrative poetry. A book like Edmund Spenser’s The Faerie Queene can also be read as a series of intervals which, theoretically, could stretch on to indeterminate length (or be contracted considerably)—yet this is only a superficial similarity, and it might do us better to look to Selland’s Japanese context. Takashi Hiraide is also the author of For the Fighting Spirit of the Walnut (tr. Sawako Nakayasu), a series of ecstatic prose poems. Selland has also translated poet Michiyo Kawano, a writer of subdued and philosophical prose poetry (and, incidentally, the wife of Takashi Hiraide). There is a strong case to be made for family resemblances here, as Selland seems to sit well in the literary neighbourhood of those writers. But Japan’s more well-known tradition of linked verse—which extends back centuries—also bears very strong resemblance to Selland’s poems, in that content is largely implied over many units of seemingly asymmetrical composition.

Keeping all this in mind, compare these selections, chosen at random, from Object States:

Entire passages were painted over again and again, lending the colours a subdued luminosity. The turn toward winter. Night filled with the chatter of distant voices. (56)

The mask’s tears are like crystal, seeing past the future. In the refracted light the letters appear, but what meanings do they come to? To open the breach in history. (29)

How to see in obscurity. Mirror arrangement; reticle bearing point. To recast the very notion of text. The poet screaming inside a fish. (6)

There’s a momentum that’s required. Movement away from the centre. When the switch is turned on and the arm is retracted. There’s not much space left. But then the light spills in. (39)

It is important to note that although the surface coolness of the writing may seem considered and removed, the short sentences and fragments come closer to actual speech than the construction of any argument or trompe l’oeil description (a technique increasingly common in contemporary American poetry, which first appeared in conceptual poetry and later in engaged political work, for instance in Layli Long Soldier’s Whereas)—in which something perceived as objective fact is put before the reader. The abstractions, like “history,” do not point towards a discussion of what history is, but rather points toward the outlying context and asks that we understand it as connected—part of a larger, historical context, and part of the poem as well. Selland is a translator-for-hire, and the writing feels to this reader like the craft of one who is engaged in living and making a living in the world outside of coterie poetics and teaching gigs. For a writer to write and publish in a foreign language and cross not only geographic cultures but also temporal differences is, at the risk of sounding very obvious, outside any set of expectations or set audience.

The title of the collection, Object States, has little to do with objectivity or frozen moments, but rather immersion. The writing within the collection is in movement and can be read dynamically: when considered in a larger context (autobiographical, literary, in its relationship to the reader) it asks what our expectations are, and how it has come to meet, let down or exceed those expectations. While this is hardly the only collection of poetry or writing to do so, in this case we might want to stay specific, for the actual content of the volume goes beyond technical details and strategies to speak about specific settings and states, however apparently unmoored—and in the case of Object States, those settings are embedded in a very unique practice. And when I began this short review by talking about margins, that is what I meant.

Matt Turner is the author of the poetry collection Not Moving (2019) and the translator of Lu Xun’s collection of prose poetry Weeds (Seaweed Salad Editions, 2019). His essays and reviews can be found in Los Angeles Review of Books China Channel, Hyperallergic Weekend, Music & Literature, Cha, among other places. He lives in Brooklyn with his wife and co-translator, Haiying Weng.