{Written by Jennifer Anne Eagleton, this review is part of Issue 46 (March/April 2020) of Cha.} {Return to Cha Review of Books and Films.}

Joshua Wong with Jason Y. Ng. Unfree Speech: The Threat to Global Democracy and Why We Must Act, Now, Penguin, 2020. 288 pgs. 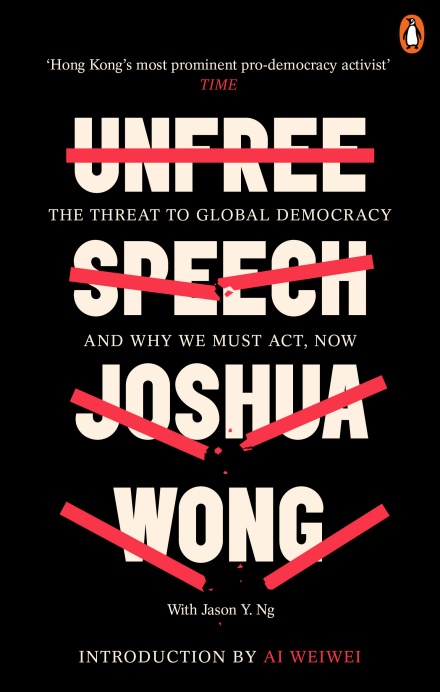 Ai Weiwei writes in the preface to Unfree Speech that Joshua Wong “represents a new generation of rebel […] A generation whose world view is markedly different from that of the established capitalist culture fixated on profit above all else”. It’s hard to argue with this sentiment when others of this “new generation” like Time’s Person of the Year, Greta Thunberg of Sweden, are not afraid to speak truth to power, or to act on their words, even when that power seems unassailable.

One can almost hear the old guard of activists step aside for these young people better able than their forebears to harness sophisticated modern technology and have limitless creativity to get their message across effectively and extensively. While often acknowledging these old guards’ contributions to various causes, these young people, often rightly so, feel that the time for more passive action is over; this is reflected in one chapter of Unfree Speech entitled “Where Are the Adults? The Umbrella Movement 成年人在哪裡? 雨傘運動”. This movement was the catalyst for increased activism and involvement in civil society by Hong Kong’s young (witness all the new political groupings arising since 2014). Wong and his secondary school comrades in the group Scholarism had already stepped up in 2012 to fight the introduction of the problematic policy of “national education”  into Hong Kong’s school curriculum.

The Umbrella Movement also led to the involvement of older generations, who were perhaps partially shamed by their previous inaction and because they admired the sacrifice and bravery of Hong Kong’s “transitional generation”.

Wong sees himself as part of this generation, meaning those born just before or on the cusp of Hong Kong becoming a Special Administrative Region of China (SAR): “The first generation to grow up after the end of British rule, but before Chinese rule had really taken hold”. Despite the early transitional years of the SAR going relatively smoothly, the city was generally trying to work out its new identity as part of China. Over time, that identity seems to have solidified into something more distinctly different from what China would have wanted.

As time goes on, the ambiguity of the “One Country, Two Systems” principle shows itself as a model that simultaneously encourages and limits liberal democracy, a governance framework that one scholar once metaphorically described as acting as both a “bridge” and “wedge” to the mainland. Thus, the increasing number of protests over this ambiguous arrangement since now the “bridge” seems to be highlighted more than the “wedge”, as we can see from the increasing attempts at integrating and assimilating Hong Kong into the one country. This has been happening ever since 2012—the year that Joshua came to the public’s attention with Scholarism at the ripe old age of 15.

Comprising three “acts”, Unfree Speech starts with a first-person account of Wong’s path to activism as mentioned above; the second act contains the letters he wrote during his two periods in jail, and the last one serves as a serious plea to the world to stand with Hong Kong and help stop the alarming slide of democratic rights and freedom of speech occurring with alarming regularity across the globe right now.

Wong was destined to become an activist and spokesperson for Hong Kong from the womb. His parents, who married just after the Tiananmen Square massacre, were Christians and active in community affairs, providing him with an excellent example of public service. But what probably made the difference was something innate to Wong—his “gift of the gab” and his “motor mouth”. His mother proudly says, “Even with a bottle in his mouth he would make all sorts of sounds like he was giving a speech on stage”. And as Wong said himself, the “microphone loved me”. Just what you need in a leader.

What struck me was when Wong went with his father to a home for the elderly, and saw the visit as something to just make the visitor feel good about themselves. He says “What’s the point if nothing ever changes”—too often “cosmetic stuff” is just surface change—which happened over the first decade of Hong Kong SAR.

I found the “prison letters” in the second “act” the most interesting as they detailed Wong’s thoughts and feelings about what had happened during the Umbrella Movement, and provided me with insights about how he and his friends thought about their next steps in fighting for Hong Kong’s freedom.

The third act is a good summary of what has happened over the last three years as Hong Kong denied visas to foreign journalists and activists, disqualified members from the Legislative Council and candidates from elections, banned political parties, and endured controversies over the cross-border high-speed rail and bridges to nowhere, to just name a few disturbing happenings over this period.

People who have followed Hong Kong’s political and social developments for at least a decade will already be familiar with the background given to the events detailed in the first and last “acts” of the book. But Unfree Speech is also an invaluable resource for an international audience that might be new to the city’s recent political history. Learning about Wong’s motivations for action and his thoughts while in prison will shed an even more intimate light on this person called Joshua Wong.

Wong’s story in Unfree Speech is a joint effort with his long-time friend and mentor, author and lawyer Jason Y. Ng, who also has experienced some unfree speech of his own. Of course, Wong’s story is still unfinished as Hong Kong continues to lurch from one crisis to another and because he can’t help working to stop the city’s slide into one country.

Jennifer Anne Eagleton, a Hong Kong resident since October 1997, is a committee member of the Hong Kong Democratic Foundation and a Civic Party member. She has been a close observer of Hong Kong politics since her arrival in the city. She was an adviser to the University of Hong Kong’s “Designing Democracy Hong Kong” project (2011-2013), and in 2012 completed a PhD on how Hong Kong talks about democracy using metaphor. Jennifer has written a number of language-related articles for Hong Kong Free Press and is currently compiling a book combining Hong Kong culture, photography, and political metaphor. A previous president of the Hong Kong Women in Publishing Society, Jennifer is also a part-time tutor of stylistics/discourse analysis at OUHK as well as a freelance writer, researcher, and editor on cultural topics. In her spare time she collects Hong Kong political pamphlets and artefacts.