Editors’ note: Oliver Farry was one of the speakers at Cha‘s “Writing COVID-19” (Thursday 30 July 2020). He read this piece written specifically for the event.

On the face of it, COVID-19 was a boon of sorts for the writer. A science-fictionesque scenario, where a single variable of social existence has been altered, a game in which one simple restrictive rule renders play incredibly complex. It was an instant stimulus, a dystopia of which we had first-hand experience.

When people were forced to spend more time at home, the more hopeful among us thought that this would help us finally get started on The Thing—the project we had been putting off for so long and which we never ever seemed to get time to write. Very soon though we found that the time confined to our houses and apartments was not going to be liberating. We could try to emulate the 18th-century French writer Xavier de Maistre, who put his time under house arrest to good use to pen Voyage Around my Room. But Maistre didn’t have Netflix or the infinity pool of lost time that is the internet. An aristocrat of the ancien régime, it is unlikely he was cooking or cleaning for himself, so he had plenty of time to focus the mind. Nor did he have children confined to the same quarters.

The shared experience of COVID-19 quickly made the thing banal. It was as universal as watching the Olympic Games or the World Cup final, without the ephemeral enjoyment. There was little unique about one’s confinement, and not much that would be of interest to others, who, invariably, would find something to scorn in the introspection of someone missing the outer world while living in relative comfort. In the first few weeks, I had a sense there might be something to write about in all this. Then I realised it was all going to be the same for everyone. Of course that is something that is familiar to the writer anyway. The familiarity breeding contempt of living with yourself in the same space day in, day out, was similar to the flitting crises of confidence a writer is beset with as they sit and face their manuscript every day. Some days it’s interesting, has potential; on others, it’s the most boring thing in the world and how dare you even think of foisting it on your fellow humans.

A lot of bad novels will come out of the pandemic. Some will be written by the Rushdies, the McEwans, the Amises and their pendants in other literary cultures; others will be written by first-time writers, for whom COVID-19 provided the impetus and the existential catalyst that their expensive MFAs were powerless to effect. One or two books of interest might slip through the cracks, endowed with qualities that eluded everyone else during their two to three months of crawling up the walls. Or maybe the best writing will ultimately come not courtesy of the people who were living a life of enforced leisure but those whose professional status, deemed essential by society, forced them out of their homes every day, and potentially into an early grave.

But the publishing industry might just write the COVID-19 interval off and decide to issue a moratorium on literary reminders of the pandemic. They might find focus groups to back them up, buttressed by findings that consumers don’t want any more gloom, in much the same way cinema-goers during the Great Depression wanted Busby Berkeley musicals and not gritty realism. Not much is said in fiction of the Spanish Flu, which tore through the world a century ago with much greater ferocity than the current pandemic has. It is there if you squint, if you choose to read between the lines of novels and plays from the succeeding decades, but few considered it worthy of explicit exposition.

Personally, I found COVID-19 both easy and impossible to write about. Easy, because it visited you every day, and provided you with ready material, and real-time historical documentation, on a scale rarely seen outside of the sporting pages (and for a few months, until the novelty wore off, the daily statistics provided me with a worthy substitute for the lack of football). Impossible because it obfuscated so much else. COVID-19 became, like many other passages in history, a big unsightly rock that can’t be budged no matter how much you might wish it away. In the early months, it seemed like it would be the defining episode of a decade that had barely begun (and which, in the fashion of a mediocre storyteller, was announced to a mostly unheeding world on New Year’s Eve 2019). You had no choice but to reckon with it. Now, seven months on, it seems less significant, even as it rages harder than ever in many parts of the world. Even in Hong Kong, where the current daily case load dwarfs the previous two waves, people seem less worried about it. If it drags on for years to come, it might come to be an annoyance similar to smog or bad traffic. It might take the sudden arrival of a vaccine to reaffirm its status as a World Historical Event.

When writing about COVID-19, you run the risk of COVID-splaining every reader, who will no doubt have their own more onerous experience of being locked down, infected or having their livelihood evaporate before their very eyes. The universality of the pandemic rendered possible narratives mawkish or trite, like those obligatory jaunt-around-the-world montages that alien invasion movies take, to show how farmers on the African savannah, Japanese salarymen and residents of the Brazilian favelas are dealing in their own way with things, before rushing back to the meat of the film, where Ben Affleck and Amy Adams plot to save the planet in the only country that really counts. If the pandemic does end soon, there is a risk it will seem all underwhelming, as if a deus ex machina has been pressed into action, and we all return gingerly to a safer, more boring world. 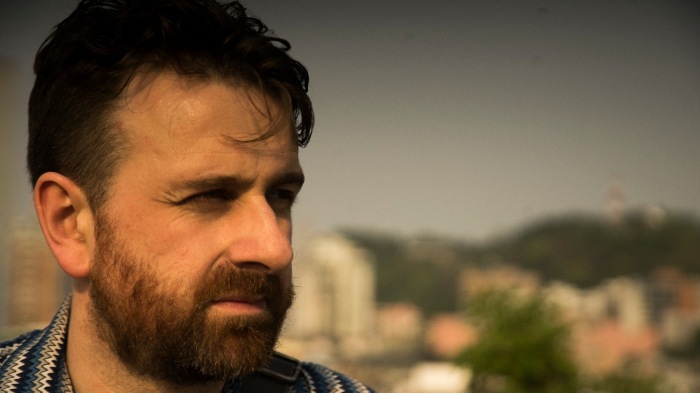 Born in Sligo, Ireland, Oliver Farry had lived in Dublin, Paris and now Hong Kong, where he works as a freelance journalist, for both print and broadcast. He is currently Hong Kong correspondent for France 24 and Radio France Internationale and he has also reported for TV5MONDE, TG4 (Ireland), Radio New Zealand and Raidió Fáilte (Ireland). His print bylines include The Guardian, The Irish Times, The New Statesman, The New Republic, The Millions, Irish Left Review, Berfrois, the South China Morning Post, When Saturday Comes and Under the Influence. Oliver’s fiction and essays have appeared in The Stinging Fly, gorse and Winter Papers. His specialised areas are news and culture, especially film, literature and football. He speaks English, Irish, French and Portuguese and he also works as a translator, proofreader and editor. Visit his website for more information. (Photograph of Oliver Farry by Colm Farry.)