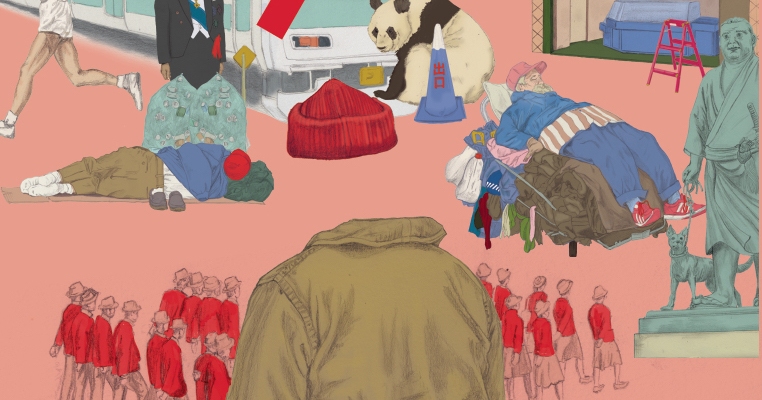 {Return to Cha Review of Books and Films.}

Though hosting the Olympic Games has often been seen as an attempt by governments to boost the economy, people from almost all walks of life have to contribute their time and efforts to its success. Some even fall victim to the Olympics. The first-person narrator of Tokyo Ueno Station, Kazu Mori, one of the homeless at the titular station, is a witness to how people—he included—are sacrificed to the collective effort to stage the games. Born in Fukushima Prefecture in 1933, he moves to Tokyo as a migrant worker, like most of his fellow homeless men, and JR Ueno Station is his first port of call where he gets off in the capital.

Mori experiences the period of Japan’s high economic growth, during which the hosting of 1964 Tokyo Olympic Games demand numerous infrastructural works. He is part of the labour force. His contribution though is no guarantee of a bright future but rather a misfortune: his eldest son Kōichi (浩一), the first character of whose name is the same as that of the then Crown Prince’s first son because both were born on the same day in 1960, commits suicide at the age of twenty-one. Mori’s wife Setsuko, whom he meets at the elementary school, dies aged sixty-five. Feeling that he would be a burden on his daughter, the widower chooses to settle among the homeless at Ueno Park..

Yū Miri, the author of the novel, grants a voice to this minority—those who have contributed tremendously to the nation but end up homeless. To make things worse, they are all compelled to leave their shelters and vacate the park whenever members of the Imperial Family come to visit the museums or galleries. The park is, as the narrator ironically remarks, a gift presented by the Emperor to the people and is thus called Ueno Imperial Gift Park (or 上野恩賜公園). As the homeless are viewed as stains on the park, they are not allowed to blaspheme the gift during the sacred visits of the Imperial Family. During the bidding for the 2020 Olympics, Mori and the park’s 500 homeless are forced out since the homelessness will taint the image of the nation, and thus the bid’s chances, but they are given nowhere else to go. By exposing all this cruel really, Yū acts as a spokesperson her discontent with the mistreatment.

Very often, the homeless are disparaged for their low levels of literacy, but the story tries in many aspects to give the lie to this. For instance, Shige, a friend of Mori, who dies of cold in his tent, is portrayed as an intellectual who constantly tells Mori about the history of buildings. A newcomer tells his story to Mori—he was fired by his company during the economic downturn and was divorced later by his wife. The tale highlights how someone once a valued member of the workforce is summarily cast aside by society. Both men are well-educated but each, for different reasons, ends up losing his home. By contrast, the park’s management, unfamiliar with homeless people, posts notices announcing the evacuation in rudimentary Japanese as they assume their target audience have little more than an elementary education. The great disparity between the outsiders’ perception and the reality is due to a stark misunderstanding of the homeless.

What is impressive about this story is how Mori’s memory and the present are deftly interwoven. There are numerous parallels drawn. One obvious example is how Mori recalls on numerous occasions the 1964 Olympics and compares with the 2020 games to show how both events mobilise almost all Japanese citizens but concurrently infringe upon the interests of some. This is perhaps one of the intentions of Yū, who writes in an afterword that the Japanese government focuses on the 2020 Olympics and Paralympics but ignores the reconstruction of the Tōhoku (Northeast) region despite the 2011 nuclear disaster in Fukushima Prefecture. The novel, where the tragic hero reflects his past while experiencing the present, criticises the neglect of this group.

Thanks to English translator Morgan Giles, the story is now accessible to readers outside Japan. Giles’s clear writing style faithfully retains the tone of the original. In some cases where translation seems impossible, the translator comes up with a brilliant way of rendering the message. An example is the evacuation notice that aims to force the homeless out of the park. The first instruction of the original reads “いつも荷物(にもつ)の外側(そとがわ)の見(み)えるところにつけておくこと”(itsumo nimotsu (nimotsu) no sotogawa no mi(mi)eru tokoroni tsuketeoku koto) (128), where the hiragana in brackets assists the reading of the kanji (or Chinese characters). Since English consists of one writing system, the translator employs a slightly difficult word, followed in parentheses by a simpler gloss: “Attach (put on) to a visible (can be seen) part of the exterior (outside) of your baggage (belongings)” (128).

To simplify things for non-Japanese readers, Giles chooses not to translate some proper nouns, as well as some onomatopoeia. For instance, “韻松亭”(inshōtei), “上野精養軒”(uenoseiyōkei) and “伊豆榮梅川亭” (izueiumekawatei) (130) are translated roughly as “the nearby restaurants” (130), while “KIRINの自動販売機” (Kirin no zidōhanbaiki) (130) is rendered as “the vending machine” (130) with its brand name omitted. The various onomatopoeia imitating the sounds of the trains (11) are not found in the English version. It would have been better had Giles provided some little endnotes elsewhere indicating her intention in not translating them.

One difficulty of translating a Japanese text into English lies in transposing grammatical subjects, which are often not indicated in Japanese. It is often impossible for the translator to be entirely faithful when a subject is absent, as shown for instance at the start of the original text: “また、あの音が聞こえる。/あの音――。/聞いている。/でも感じているのか、思っているのか、わからない。[…]” (mata ano oto ga kikoeru/ ano oto / kiiteiru/ demo kanjiteirunoka omotteirunoka wakaranai) (7). The reader at this point has no idea who is speaking because the sentences are grammatically correct even though the subject does not exist. English, however, needs a subject: “There’s that sound again. /That sound – /I hear it./ But I don’t know if it’s in my ears or in my mind.” The two versions give the same reader a different impression. In the former case, it can be the voice of everybody, while in the latter the voice is restricted to the first-person narrator Kazu Mori.

This translation, thankfully, allows more people to read Yū’s work and to learn about the plight of the homeless in Japan, many of whom have no place to belong. They are a group that Japanese society does little to help and treats as if they don’t exist.

Also see this review in Cha:

James Au Kin-Pong is a Master’s graduate of both Hong Kong Baptist University and the School of Oriental and African Studies (SOAS) in London. He is currently a PhD candidate at the University of Tokyo, writing his dissertation about the relation between history and literature through close readings of East Asian historical narratives in the 1960s. His research interests include Asian literatures, comparative literature, historical narratives and modern poetry. During his leisure time, he writes poetry and learns Spanish, Korean and Polish. He teaches English at Salesio Polytechnic College and literature in English at Tama Art University. His Cha reviews can be found here.