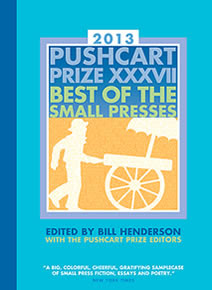 We at Cha would like to announce our nominations for the 2012 Pushcart Prize:
Congratulations to the above nominees. We wish you the best of luck and thank you for letting us publish your wonderful work.
.
Also see our Best of the Net nominations this year.–

We are happy to announce that the following pieces of work, selected from the July 2011, November 2011, March 2012 and June 2012 issues of Cha, have been nominated by us for inclusion in Best of the Net Anthology 2012 (published by Sundress). Congratulations to these writers and good luck! 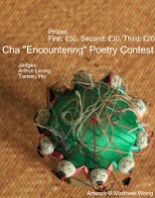 Thank you to all who submitted work to Cha‘s “Encountering” Poetry contest. Out of 400 highly accomplished submissions, judges Arthur Leung and Tammy Ho have selected the following seven poems as the finalists. Although we had originally intended only to recognise six poems, we had to add one more place because we thought the following seven pieces were so strong and we could not forgo any of them. Please scroll down to read the poets’ biographies and their commentaries on the poems. All seven poems will be published in the forthcoming issue of the journal. We would also like to take this opportunity to thank our anonymous patron from San José, USA who generously donated the cash prizes.
0
UPDATED: After reading all the winning poems, our patron has decided to raise the highly-recommended prize from £5 to £10 each. He agreed it is difficult to let any of the poems go. He also wanted us to reiterate that the purpose of the contest was not to make money (that’s why we did not charge any entry fees) but to reward good writing. We are very excited and honoured to present these poems to you in the March 2012 issue of Cha.

UPDATED: The March 2012 issue of Cha has now been launched.

José Manuel Sevilla on “Sonia Wants to Rent an Apartment”: The poem belongs to the new book I am writing. All poems are related to real people that I know or have met in the past. Sonia is a friend living in Barcelona. As the rest of the poems of this book, all images are part of my own biography, since my teenage years when I belonged to a clandestine organization fighting the remains of the dictatorship, my business trips, my visit to Croatia during the Balkan’s war, my stay in Berlin when the Wall was opened, my life with my wife in Mexico and in Hong Kong or my interest in History and particularly in the atrocities of the 20th Century, like Auschwitz and Hiroshima. READ THE POEM HERE.

Bio: Born in Barcelona in 1959, José Manuel Sevilla has published several poetry books including Alicia in Ikea’s catalogue (2004) and Ashes of Auschwitz en Eighteen Dogs (2009, Angel Urrutia Award). He founded “Poets against Aids” in Spain and co-founded the theatre Group “Bonobos”. He has also translated Peter Reading’s C into Spanish. Sevilla has been living in Hong Kong since 2003.

Ranjani Murali on “Flashback Sonnet: B-Film Actress Seeks Lost Bastard Child”: The poem is part of my latest project, which is a meditation on archetypes and tropes from Hindi and Tamil cinema. The scene was based on my memory of an ’80’s Tamil song, where the heroine is reclining on sand, beckoning to her lover. I was intrigued by how much work goes into constructing “gaze” and/or desirability. This meditation seemed to need a form that was sensitive to a turn in perspective–how one is constructed by others and how one constructs the self–and the sonnet seemed to fit the idea perfectly. I had to revise the poem several times in the past six months, and I’m happy that it is, in some ways, a mouthpiece for my forthcoming project. READ THE POEM HERE.

Bio: Ranjani Murali received her MFA in poetry from George Mason University, where she taught creative writing, English, and composition. She was the recipient of Vermont Studio Center’s Kay Evans Poetry fellowship and a nonfiction fellowship from the Fine Arts Work Center in Provincetown, MA.

Aditi Rao on “Reunion”: To me, “Reunion” is essentially a poem about rebuilding, about what has been lost, what can be salvaged, and the stages involved in that process. I think of relationships between people as the creation of a common “language” — a way of making sense of the world together. This poem explores that idea through different stages of re-creating a fractured relationship. The form of this poem was a happy accident. I had just spent a week with close friend who is a playwright, and we’d talked a fair bit about what makes a scene and about telling an important story in a moment between characters. So, when I sat down to write what would become “reunion,” the stage directions and dialogue format were in my mind, and this format gave me the freedom to play with time in the poem in way I found really interesting. READ THE POEM HERE.

Bio: Aditi Rao is a poet based in New Delhi, India. Winner of the 2011 Srinivas Rayaprol Prize for poetry, Rao facilitates writing workshops in Delhi and works as a consultant in the field of peace education. She holds a Masters’ of Fine Arts in Writing from Sarah Lawrence College.

Andrew Barker on “On Encountering Jean-Claude Van Damn”: This piece was written as an attempt to turn an anecdote into a poetic work. That anecdote concerning encountering the man in question during a night out in which he was presumably, as the wealthy often are, ‘suffering an adverse reaction to a prescribed medicine,’ or being what the rest of us are in such situations ‘Off his tits.’ If it works as a poem, it works due to the line length example of form imitating content, the poem moves as erratically as he does, and for the last line. There is something impressive about watching somebody who really doesn’t care what anybody else thinks about them. As anyone who has ever encountered Chris Doyle will testify, there is something impressive about watching someone who can still get the job done, do the work they’ve set out to do, at the level at which they do it and be that out of it. I can’t do it. And I’m jealous. The poetry is in that final, ambiguous realization. There is something impressive about watching someone making a fool of themselves who simply doesn’t care that you think they are making a fool of themselves. He got the girl as well. READ THE POEM HERE.

Bio: Andrew Barker lives in Hong Kong. He is the author of Snowblind from my Protective Colouring (2009). He has degrees in English Literature, Anglo/Irish Literature and American Literature. He teaches at various universities and has recently completed a 450 page novel in verse set in Onegin Stanzas.

Dena Rash Guzman on “When I Was the Chinaman’s Granddaughter-In-Law”: I wrote this poem in 2008, the Year of the Rat. It is a direct recollection of a memory from the 1996 Lunar New Year Festival, the Year of the Rat. I lived in Las Vegas, Nevada at the time and was nearly 24 years old. Soo Chin was from Hong Kong. He had probably been in the United States for a little over 40 years. I wish to know more about his story, but I have only bits and pieces of it, and no way now to learn more. I have lost contact with Grandpa Chin. However, he had a huge impact on my life, and I could fill a small book with Grandpa Chin’s memory and his confusing, but always welcome and often profound, wisdom. READ THE POEM HERE.

R. Joseph Capet on “Sample 70215, 84”: I suppose this poem was born out of the stories my father used to tell of a special program he was in as a boy, volunteering in the Air and Space Museum in Washington. His favorite thing there was the moon rocks—much larger pieces kept in storage than the fragments that are out on public display at any given time. I wanted to capture something of the paradoxical way that, for those (like my father) who watched the moon landing, the Apollo missions added a whole new romance to that distant place, even as the thought of touching it began to wear away at the mystery it had always embodied in the mythologies and occult symbols of the world. READ THE POEM HERE.

Bio: R. Joseph Capet is a poet, playwright, and essayist whose work has appeared in decomP, The Montreal Review, and ITCH. He currently serves as poetry editor for P.Q. Leer in addition to teaching poetry at Chemeketa Community College in Salem, OR.

Shivani Sivagurunathan on “Bees”: As romantic as it sounds, the first line of the poem came to me one night just before bed. Too lazy to run to the nearest sheet of paper, I chose to turn off the lights and do the most practical thing: sleep. The line, however, remained fresh in the morning and so I proceeded to write the poem. I had recently been contemplating the coexistence of the ordinary and the extraordinary in relationships- how initial explosive engagements between people, after a long period of time, become associated with regular, pragmatic objects like fans and kettles; how such items may be triggers of memories of ancient truths and, consequently, I wanted to explore the spontaneous encounters people have with surreal moments in the context of everyday life, and the impact that they bring on forgotten intimacies. READ THE POEM HERE.

Bio: Shivani Sivagurunathan is a Malaysian fiction writer and poet. Her poetry chapbook, Chiaroscuro, was published by bedouin books in 2010 and her collection of short stories Wildlife on Coal Island came out in August, 2011. She now lives in Malaysia and lectures at University Putra Malaysia.
–
–
–