January 3, 2017 by t - 0 comments
There will be a launch reading for the March 2013 issue of Cha: An Asian Literary Journal at AWP. The event will be hosted by guest editors Kaitlin Solimine and Marc Vincenz and co-hosted by the Fairbank Center forChinese Studies at Harvard University.
Feature readings by past and current Cha contributors Eleanor Goodman, Bill Lantry, Kim Liao, Mai Mang (Yibing Huang), Tracy Slater, Marc Vincenz, and Nicholas YB Wong.

Links:
The Arts House
Facebook event page
“
Is there space for poetry in the mental life of people in Singapore and Hong Kong? How does one survive and thrive in these two ultra-modern, pragmatic and cosmopolitan cities and stay true to one’s artistic calling? How does one balance the contemplative, aesthetic and hermit- like endeavours of a poet with globalised Asian environments that celebrate business, busy-ness, and wi-fi connections?
For the August edition of World Voices, HK-based poet, literature professor and reviews editor Eddie Tay will be reading from his recent poetry collection, The Mental Life of Cities, and talking about how he draws inspiration from urban life in these two frenetic Asian cities.
About Eddie Tay

Eddie Tay grew up in Singapore and has been living in Hong Kong for the past eight years. As a poet, literature professor, researcher, and reviews editor of an online literary journal, he has come to see poetry (and literature) not just as words on a page, but as social and aesthetic impulses working their way through local and global communities.

Eddie Tay is the author of three poetry collections, Remnants, A Lover’s Soliloquy, and most recently, The Mental Life of Cities. The first two collections consist of free translations of Tang Dynasty poetry as well as original poems, while his most recent collection which features bilingual poems is inspired by how English and Chinese intertwine and take root in the modern Asian cities of Singapore and Hong Kong. Colony, Nation and Globalisation: Not at Home in Singaporean and Malaysian Literature, his study of colonial and contemporary literature of Singapore and Malaysia, was published this year.
Tay teaches children’s literature and the reading and writing of poetry at the Department of English, Chinese University of Hong Kong. He is a member of the Poetry OutLoud collective based in HK. He was a featured poet at the Hong Kong International Literary Festival 2011. He is also serving as Reviews Editor at the online journal, Cha: An Asian Literary Journal.

Reading on June 17
Toto Funds the Arts
is delighted to invite you to a reading by poet and author
Mani Rao
of her radical, literary translation of the Bhagavad Gita
She will be in conversation with Arshia Sattar
Venue: Crossword Bookstore, ACR Towers, Ground Floor, 32 Residency Road, Bangalore – 1
Date and time: Friday, 17 June 2011 at 6.30 pm
In this bold, new translation of the Gita, poet Mani Rao cuts past conventions and uses language innovatively; at the same time she adheres strictly to the meaning of the Sanskrit original and is sensitive to its nuances.
Read more about the event here.

[Click image to enlarge]
Papa Osumbal’s poetry was published in issue #4 and issue #10 of Cha. His poems “At Hac Sa Beach, Macau” and “A Bum’s Demise” were discussed on A Cup of Fine Tea.

Greg Santos’s The Emperor’s Sofa (DC Books) is being launched in Montreal on April 29th at The Blue Metropolis Festival. Greg will be reading from the collection and four other DC Books authors will also be reading and launching their books. now up, with online ordering possibilities. More information about the launch HERE.
–
–
Greg Santos’s poetry was published in issue #10 of Cha.
–
– 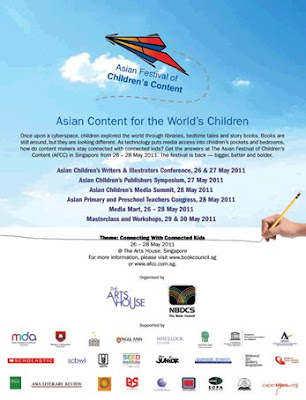 Once upon a cyberspace, children explored the world through libraries, bedtime tales and story books. Books are still around, but they are looking different. As technology puts media access into children’s pockets and bedrooms, how do content makers stay connected with connected kids?

Get the answers at The Asian Festival of Children’s Content (AFCC) in Singapore from 26 – 28 May 2011. Organised by the National Book Development Council of Singapore and The Arts House, this festival is back — bigger, better and bolder.

Join experts from around the world at Asia’s gateway to the international children’s content market. Celebrate, contemplate and collaborate on exciting new ways to engage, educate and empower the world’s children on a global stage through uniquely Asian content. 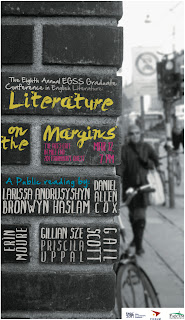 The annual NUS Literary Society Evening of Poetry and Music will feature upcoming writers and literary figures, interspersed with live musical performances from NUS music groups. Also included in the EPM will be the prize presentation for the ’10/’11 Creative Writing Competition and readings by the winners.

“Some of the city’s most well-known poets bring the love at an Infinitheatre fundraiser this Sunday, Feb. 13 from 5–7 p.m. at Bain St-Michel (5300 St-Dominique). Mike Spry, Gillian Sze, Mary di Michele, and others will read the love poetry of well-known Montreal poets like Irving Layton and Leonard Cohen. Wine and cheese will follow, with music by Karen Young.”

2011 is starting off with a bang! We’re ushering in the new year with a Mouth to Mouth Open Mic featuring activist and spoken word artist Kelly Zen-Yie Tsai and poet Ocean Vuong. So, come, bring a friend, and be ready to get your socks rocked off by poetry.

Ocean Vuong’s poem “Paramour” was published in issue#10 of Cha; the poem has been nominated for inclusion in Best of the Net Anthology 2010.
–

LANTERN REVIEW & BOXCAR POETRY REVIEW Joint Reading
Lantern Review is hosting a joint reading with Boxcar Poetry Review on Friday night (the 4th) at 7:30 pm, at Go Mama Go! (1809 14th St. NW). Entrance is pay-as-you-wish. About 16 writers from the two journals will be reading and light refreshments will be provided. The event is open for all and is an AWP off-site event. More information is available at the event’s Facebook invitation page. Also check out Lantern Review’s blog.
–

Association of Stories in Macao
澳門故事協會
ASM TO LAUNCH 13 NEW BOOKS ON SATURDAY DECEMBER 18
ASM’s 2010 Booklaunch
to be held at CCI (Creative Macau) Macau Cultural Centre
4.30 pm Saturday 18th December
Guest of Honour
The distinguished Hong Kong scholar and poet
Professor Leung Ping Kwan
At a ceremony to be held at CCI (Creative Macau) at the Macao Cultural Centre, ASM (the Association of Stories in Macao) will launch thirteen new books, covering a range of categories, including contemporary and classical poetry, poetry translation, short fiction and life writing.
Guest of honour at the launch will be the famous Hong Kong poet and Lingnan University Comparative Literature Chair, Professor Leung Ping Kwan.
Established in 2005, ASM is a non-profit government-registered community organisation dedicated to the promotion of writing and other artistic expression from and about Macao. Up until now, ASM has published fifty books, including poetry, novels, stories for children, teaching guides and much classical poetry in translation. ASM has published first books of poetry or fiction by many young Macao authors. This year’s launch features a second volume of (twenty) Australian poets, presented in parallel text, in English and Chinese.
The books (many of them bilingual) to be launched on December 18th include works by Cha contributors Leung Ping-Kwan (Amblings) and Christopher Kelen (to the single man’s hut – poems and pictures and China Years: New and Selected Poems). Detailed can be found in this catalogue [pdf].

Nabina Das and Rohith Sundararaman will appear in the Poetry with Prakriti Poetry Festival this  December.

Poetry with Prakriti is a two-week long festival of poetry held annually in Chennai to coincide with the famed Chennai music season. The festival brings together eminent and emerging poets, featuring readings to small, intimate audiences. These readings take place at several venues in the city, including colleges and cafeteria, IT parks and green public parks and spaces, and select shops and commercial establishments. The idea is to bring poetry closer to the public of Chennai. This year’s festival is the fourth edition.

If you have a few minutes to spare and access to a phone with video recording, camcorder, or webcam, you can take part. You don’t need any experience as a performer or poet. There’s no pressure – it’s just a bit of fun.

You will be sent three lines of poetry and asked to record yourself reading or performing them, and then to send the resulting file back to us. How and where you perform the lines is entirely up to you.

Once everyone’s sent back their contributions, they’ll be edited together into a video-poem. At this stage we have no idea how it will turn out. Your performances will play a part in shaping the final piece.

Rocco de Giacomo is a widely published poet whose work has most recently been accepted in the literary journals Contemporary Verse 2 and Prism International and has recently appeared The Carolina Review and The Prairie Journal. On October 18th, 2009, his first full-length poetry collection, Ten Thousand Miles Between Us was launched through Quattro Books. Also, his fifth and latest chapbook collection of poems, Catching Dawn’s Breath (LyricalMyrical Press, Toronto) was launched in March of 2008. He is a member of the council for the Art Bar Poetry Series and a member of the bpNichol Coordinating Committee.

As usual, there will be an open mic to follow. Come out to hear Rocco, a great performer, and maybe share one of your own pieces.
–
–
Rocco De Giacomo’s poems were published in issue #4 and issue #10 of Cha.
=
–

Ankur Agarwal will be reading a few of his  poems on Saturday 13 November, at Jaaga, as part of the Poetry Across Borders project (poets reading from Bangalore and Berlin this time).

Phill Provance’s poems were published in issue #12 of Cha. His poem “St. Petersberg Has Many Churches” was nominated for a Pushcart Prize 2010.
–
–
My Tweets