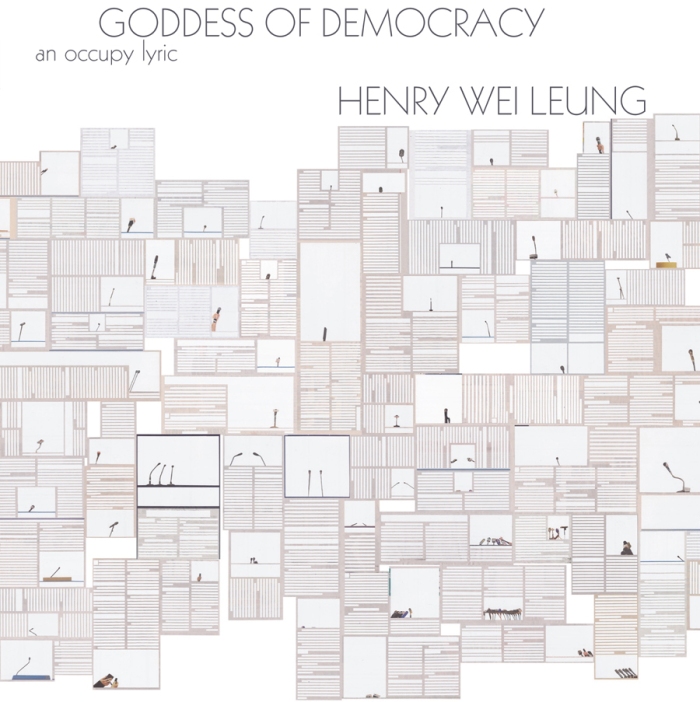 Here’s a long opening-sentence: when I saw the Chinese characters quoted above in Henry Wei Leung’s piece “An Umbrella: Revolution,” characters I recall from the streets of Tsim Sha Tsui, Mong Kok and Admiralty, characters I saw hanging—illegally—from the top of Lion Rock (which were visible from the Hong Kong Baptist University campus, where I’ve worked for over a decade), characters on a large banner I posted facing outward from my office windows, I asked my girlfriend (who accompanied me on many of the thirty-or-so days and nights I spent wandering the car-free-corridors of Hong Kong during the “official” seventy-nine-day Revolution in Fall 2014) to once again translate the characters that had been etched onto the tables of my non-ideogram-deciphering brain for over three-years.

I want real public elections, she answered without missing a beat, or even visibly sighing, given I’d asked her the same numerously.

Ya, but, are you contextualising them, like the French Tu me manques or Spanish Tu me faltas translate literally into you are missing from me, but we typically turn these into the English locution “I miss you.“

Here’s the footnoted-as-“*My translation” Leung provides following the five characters I saw as the rallying cry of the Umbrella Revolution:

This prose poem, which features the empty space that formally contextualises the thirty-six pieces in Goddess of Democracy, concludes nine sentences later with “Eventually, the I is torn off”—thus, the blanks, redactions and erasures in Leung’s evocative book. Hong Kong has, Hongkongers have, been increasingly silenced. How even to speak, to be, if, when, there’s no more I, no more desire, no more public to speak of and to?

Leung conjures the supersession of universal suffrage by a cold dystopia when in one poem he iterates “But the machines insist. The / machines insist” before concluding in the next stanza with “Let me be / your country. Let me be nothing for you.” He evokes the Romantic utopia of the spotless pedestrian-populated protest thoroughfares when in another lyric he asks forgiveness for “my love for freedom // and for my foreign question: what is / freedom when divorced from / from?” Leung’s candid tone turns suspicion into sincerity in another piece when he concludes, sans question mark, “What if freedom just means shopping.” The book is replete with informed, and always innovative interventions and interrogations. Leung eschews easy echoes. He shows that mere repetition too is a form of erasure.

My favourite piece in the book is “Goods of Democracy,” a designation that plays on the book’s title, and recalls a stanza in the second poem, called “Life Sentences Sonnet for the Goddess of Democracy”:

9
G.O.D. in Hong Kong means Goods of Desire, a fashion brand which
sounds like jyu hou di: “live better.” Does anyone say “God” except at
first mistaken sight? Goddess of—

G.O.D./Jyu hou di is evolved into a more active—and meme-able—appeal in the popular franchise’s later (mainly) T-shirt slogan “Delay No More,” a homophonic translation of the Cantonese oath díu néih lóuh móuh, predictably meaning “fuck your (old) mother.” Like Jonathan Swift before him, Leung typically encodes the anger that is his and every colonial subject’s entitlement with more sophistication. He writes, “Metaxu:“

the force that cleaves us
is the force we cleave to,
double-surfaced thin transparency,
mirror in a daylit window, freed

The pauses here provide the thoughtful reflection and connection which the tourism he critiques throughout the book can never offer. A gifted satirist, he refines his ire, his protest, into art. Laden with references, Leung’s “Goods of Democracy,” like the rest of the book he subtitles “an Occupy Lyric,” includes Hong Kong’s institutionally endangered traditional Chinese characters (China has used “The Chairman of Mao”‘s simplified ones since the cultural revolution) as well as overt references to Aphrodite, Sisyphus and Zeno, to Beckett, Joyce and Weil.

Under the second blank and redacted subtitle of “Island of the Goddess,” the book’s longest piece, Leung encloses a sardonic arithmetic symptomatic of the Hong Kong imaginary 17 years after the handover:

Leung seriously plays upon dates and homophones to expose Beijing’s political proclivity to sanitise horror. “8964,” for Chinese conscious ideology at least, is a more palatable way to refer to the atrocities of the Beijing Massacre on 4 June 1989. “71” reduces the trauma of the 1 July 1997 handover of Hong to China, a trauma doubled in light of “8964,” to a mere indecipherable-to-outsiders number. Hong Kong’s Chief Executive at the time of the protest was elected by the narrowest of margins: “689” votes (of the valid 1050 cast by the Election Committee of 1200 in 2012). Henry Leung’s other numbers encourage non-Hong Kong (area code “852”) familiar readers to mine the poet’s included “(Abridged Timeline: Hong Kong 2014),” installed near the end of the book; the vernacular timeline is also the source text of the erasure poems “(First erasure)” and “(Next erasure).” Conspicuous absence, Leung illustrates, can—and in many cases ought to—manifest itself as haunting presence.

As much through spaces and remains as through reprise and reversal, Goddess of Democracy is aesthetically beautiful. Leung’s craft also encodes a sincere book-long self-portrait disclosing his “unease” about “documenting” Hong Kong’s “civil disobedience,” to borrow from Cathy Park Hong. Leung’s book includes a number of paratexts, all of which supplement this portrait of the artist. We get Cathy Park Hong’s thoughtful, concise “Introduction.” We get Henry Leung’s own “Dedication Endnote,” which concludes with a second-person interpellation of the reader:

You are a full silence I cannot redeem. You need
No breath from me, not on your life. Not for your freedom.

We also get three short nonfiction essays in the book’s middle part. These are elegant and appear to be written with the legerdemain and play of the just-late William H. Gass. But like all of Gass’s work, Leung’s superficial lightness conceals a philosophical care. Though easy to read, the pieces are not belletristic, are not light. They evoke the pain and anger that result from false connections, the experience of food stamps and the witnessing of privileged “voluntourism.”

As pivotal as the reiterated terms agora, bloom, erasure and nothing, the word privilege recurs in Goddess of Democracy. I think readers are privileged to witness Leung’s simultaneous embracing and dismissal of this ostensible license to opportunity. Leung, so we learn through the paratexts, poetic texts and prose ones, is a survivor of food stamps, a graduate of Stanford, a Fulbright fellow and an individual literate in classical Chinese, in Greek and Latin classics, and, among so much more, 20th century Irish fiction. Goddess of Democracy is a polyvocal, glocally rich text about Hong Kong (and so much more). Goddess of Democracy is published in the US.

the stranger in his early thirties who stood alone for a weekend in the Causeway Bay camp holding a yellow umbrella and a sign: “I do not support police violence.” He had come from England four years ago, for work. A woman shouted at him across the barricade in English: “Go home! What right do you have? You are not Chinese. Go back to your country.”

He said, “Thank you for your opinion.”

This is why Leung’s review of the collection Desde Hong Kong: Poets in conversation with Octavio Paz (Chameleon, 2014) ultimately stresses how “The anthology’s poetics is bound up in longing, loss and drift. Would you expect otherwise from a city-state which has no citizenship, only a residency status quantified by years? What we’re presented with is not just ‘Hong Kong’ but desde or from Hong Kong—a preposition already on the move.” Here Leung is: a non-native of this disappearing place, this place he calls home, this home he speaks for, as a stranger, as a local, as a critic, as a crowd, as a lover. I cannot help but think of James Joyce, who, for the duration of WWI, composed his encyclopedic ode to Dublin in so much detail that it proved to be a map of the city measured in footsteps, cane taps and echoes, a precise geometry, and love song, performed from the geographic remove of “Trieste-Zurich-Paris.”

Leung’s Irish connection is illustrative. Unlike Ireland, that “Island of Saint and Sages” whose “dirge has been sung,” whose language has been erased (so Joyce laboured not to lament in occasional essays), Cantonese remains as Hong Kong’s lingua franca, notwithstanding a Beijing-based hegemony that abases the Cantonese language as a mere dialect, thus incorporating over six-million Hongkongers into an official narrative in which they have no first language. Versions—or visions—of Ulysses haunt my reading of Goddess of Democracy: I see postcard-slighted Denis Breen in the local epithet “游 里UP,” Jewish Leopold’s soap and love letters in “You bloom in this world,” and Stephen Dedalus’s seashell teeth chattering in Martello Tower in “a sound like chewed rocks. Skylight, dim circle.” Not only present in Goddess of Democracy‘s second epigraph, Joyce’s heir Beckett reverberates in the many half-veiled allusions to the novelist’s trilogy, such as “I walk along rivers pocketing stones” and “The other way the other telling.” And Beckett’s silent screams echo through the book’s physical emptiness and blankness. These white stains, these sad, beautiful, desperate signs of hope and malaise, these cafards, evoke the waiting, the nothing and the everything & nothing of plays like Waiting for Godot, Endgame and Krapp’s Last Tape.

I’ll go on by closing with another haunting, another question, a haunting question Leung frankly wonders about in essay “[3],” where he iterates his wounded incredulity at the fact that an article of his for an international journal in English about “Hong Kong and even more so of what it means to be human” was at first accepted then perversely rejected because it “had too much of an insider’s perspective. Too much. They wanted a foreign gaze; they wanted a tour.” The article, titled in English “I Just Want to See the Sea,”

begins with a writer going down to the sea during a painful political time, when suddenly a security guard emerges to coax her back. What does it say about this city on an island if the first assumption is that someone sitting near water must want to throw herself in? And because of that assumption, who is less free: her, or the guard? 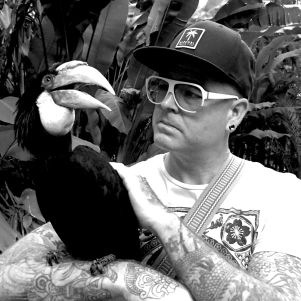 Jason S Polley is associate professor of literary journalism, postmodern literature, and poststructuralism at Hong Kong Baptist University. Since his BA in English and Religious Studies at the University of Lethbridge he has lived, worked, and traveled to places including China, Canada, Colombia, India, the Philippines, Indonesia, Malaysia, and Micronesia. He divides his time between reading, scuba diving, practicing yoga, and skateboarding. His research interests include post-WWII graphic forms, media analysis, Hong Kong Studies, and Anglo-Indian fiction. His creative nonfiction books are the travel-narrative collection refrain and the literary journalism novella cemetery miss you. One day he’ll be a birder.