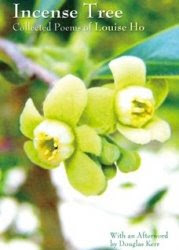 Cha contributor and most well-known contemporary Hong Kong poet Louise Ho will be launching her collected poems Incense Tree (Hong Kong University Press) on Tuesday 10 March 2009 during the Man Hong Kong International Literary Festival.
The title poem “Incense Tree” was published in the August 2008 issue of Cha: An Asian Literary Journal, along with two other poems “A Veteran Talking” and “Marching”.
From the Man HK International Literary Festival website:
Tuesday 10 March 2009
7:30pm The Fringe Theatre HK$110
event code: 300D
English in Hong Kong: More Than a Colonial Residue — Louise Ho is considered the leading English-language poet in Hong Kong, happy to work in a language that might be thought a colonial residue, and well versed in its poetic traditions, often making use and sometimes making fun of them. She launches her collected poems, Incense Tree, for the launch of the inaugural HKU Poetry Prize. She talks with Michael Hollington about her poetry. This event will be followed by an announcement and details about the inaugural HKU Poetry Prize.
Louise Ho’s poetry was published in issue #4 of Cha.
–
–