{Written by Amanda Cattel, this review is part of Issue 39 (April 2018) of Cha.} {Return to Cha Review of Books and Films} 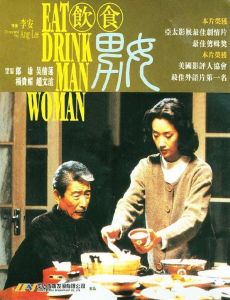 Eat Drink Man Woman tells the story of an ageing, unhappy chef and his three atypical daughters living in the ever-changing city of Taipei. Directed by Taiwanese filmmaker, Ang Lee, and released in 1994, the title of the film derives from a classic Confucian text that expresses human desires in the form of food and sex, recognising them as natural elements of life. The film explores the tumultuous romantic lives of all three daughters and the changing dynamics in their father’s business and corresponding relationships, as well as the themes of globalisation and evolving cultural mores.

Ang Lee’s idiosyncratic directorial style is evident throughout the film, with the main sources of conflict resulting from unrequited love, tense familial relationships and long-harboured resentments. Various plotlines are interwoven with quiet sequences of city landscapes and cooking, forcing the viewer to reflect on and anticipate the outcome of events. The thematic elements in Eat Drink Man Woman draw from both Eastern and Western attitudes, exemplifying a clashing of cultural and stylistic boundaries. Similar to his other Taiwanese films (Pushing Hands, The Wedding Banquet), Lee illustrates the conflicts between Confucian ideals and modern, globalized society by using the family dinner table as the key method by which the characters express their love and establish domestic problems.

“Eat” is the basic human desire that the film is founded upon, as the master chef, Mr. Tao Chu, prepares a feast for his family every Sunday evening. Although the city is racing towards modernisation with motorbikes and skyscrapers, Mr. Chu’s meal emphasises classical Chinese dishes, the preparation of which takes up the entirety of the day. Lee illustrates an ironic duality in each beautifully elaborate cooking sequence, as the pomp and circumstance of the divine meal is ultimately unenjoyable. At first glance, the weekly Sunday meal appears to be a labour of love and a form of leisurely familial communion. However, the dinner is treated like a torturous tribunal by all three daughters, as each one of them reluctantly answers their father’s questions while reaching for a taste of a dish. The submerged tension and discomfort can be sensed auditorily through the clinking of soup spoons against bowls and the plopping of food onto a plate.

Like his daughters, Mr. Chu does not enjoy the dinners, as the highly-regarded chef with legendary culinary skills is losing his sense of taste. Like a famous musician losing his ability to hear, Mr. Chu finds himself in a tragic situation in which he cannot control the quintessential component of his true identity. The loss of the one ability he excels at only serves to highlight how incapable he is at other significant duties, like understanding his three daughters. Cooking is the only medium Mr. Chu relies upon to communicate with his family and serving the Sunday meal is his form of expressing love. However, this form of demonstrating affection loses its effectiveness as the tensions of their weekly dinners reach a boiling point when one daughter announces they are leaving home. Although surprised at first, Mr. Chu subsequently plans an engagement that will eventually shock the whole family.

Every family member avoids one of the thematic human desire in his/her own individual way, all the while finding their life to be comparably unsatisfying as a result. Mr. Chu, for example, has lived the life of a lonely widower for sixteen years and does laundry for his children while they are at work. He finds himself lost in clouds of cigarette smoke as the mother of a neighbourhood friend, known as Mrs. Liang, puffs away while articulating romanticised philosophies on life.

In addition, each of his daughters defies conventional expectations of what a Taiwanese woman should be. The eldest daughter, Jia-Jen, melancholic from a catastrophic love affair, has converted to Christianity and works as a no-nonsense schoolteacher. The youngest, Jia-Ning, works as a cashier at Wendy’s, a symbol of Taipei’s transition to a modern metropolis and the influence of globalisation. Finally, the middle daughter, Jia-Chien, is a successful and liberated airline executive with plans of moving into a beautiful apartment building called “Little Paris in the East.”

The romantic lives of Mr. Chu and his three daughters all play with cultural expectations and merge Eastern and Western attitudes. Jia-Ning starts a relationship with her best friend’s forlorn boyfriend and has a baby out of wedlock, illustrating naïveté and an immature form of love. Jia-Jen is at first poisoned with paranoid consternation, as anonymous love letters pile up on her desk; however, in a sudden turn of events, she glamorously makes herself over and marries a volleyball coach in secret. As a foil to her conservative older sister, Jia-Chien is headstrong and sexually liberated, with no inhibitions about having an affair with her married co-worker. Each daughter feels like an outsider: Jia-Jen because her Christian values seem out of place in contemporary Taipei; Jia-Ning because her modern life contrasts dramatically with her father’s traditional principles and Jia-Chien because her true passion, being a chef, seems unlikely to be realised.

The relationship between Jia-Chien and her father is the most acidic, as she possesses her father’s culinary talents but is left unsupported in the development of her skills. Jia-Chien releases her resentment by cooking gourmet meals at her boyfriend’s apartment and developing a paternal relationship with her father’s best-friend, Uncle Wen. Perhaps in response, Mr. Chu forms a surrogate father-daughter relationship with Shan-Shan, the daughter of Jia-Jen’s former classmate, Jin-Rong, and granddaughter of Mrs. Liang. In the end, Uncle Wen proves to be the mediator when things become hostile between Mr. Chu and Jia-Chien, as his death unites the two in grief and sorrow, triggering Mr. Chu’s retirement from the restaurant in which he created his legacy.

The discontented household and the corresponding melodramatic problems within the family are quickly resolved in a surprising and satisfying ending. As Jia-Ning and Jia-Jen begin to live their lives away from their childhood home, their father decides to hold a Sunday dinner. But this time, there are more guests and the added formality of invitations. The elegant cooking sequences of earlier meals is replaced with chaotic mishaps, as each guest arrives in formal attire. Mr. Chu toasts everyone at the table, gradually becoming intoxicated. As the daughters prepare for the announcement of their father’s engagement to Mrs. Liang, Mr. Chu sends all the dinner guests in scandalised shock as he turns to Mrs. Liang’s daughter and professes his romantic intentions to live with Jin-Rong and take care of little Shan-Shan. In a humorously slapstick reaction, Mrs. Liang collapses and is carried out of the house while Mr. Chu looks on.

Overall, the dichotomy of Eastern and Western values makes each thematic element of food and sex rich in complexity and empathy. Eat Drink Man Woman is a classic Ang Lee film that reveals Lee to be an empathetic and humanistic director. Even though the non-linear structure of the film can at times be counter-intuitive, the performances provide deep insight into family conflicts and relationships.

Amanda Cattel is a Chinese-American, currently studying at the University of Central Florida. She is a contributor to The Estia Collective and The Odyssey Online. She enjoys writing about film, competitive figure skating and fashion studies. When she’s not writing, she is a performer for The Improv Academy and plays the piano for nursing home residents.