{Written by Ronald Torrance, this review is part of Issue 46 of Cha.} {Return to Cha Review of Books and Films.} 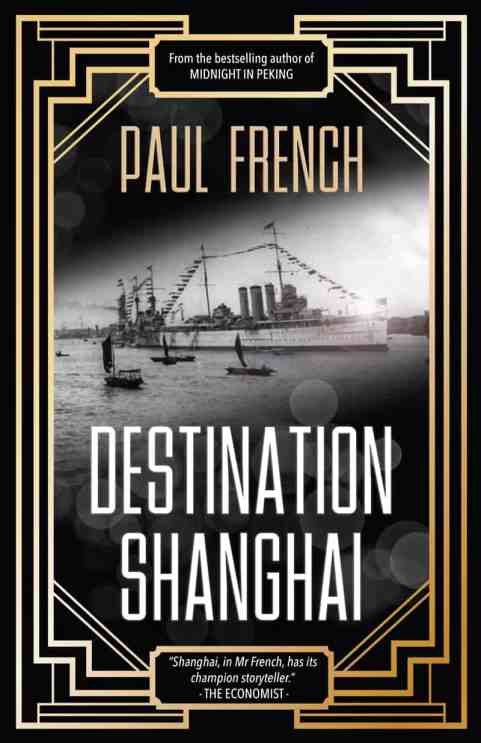 Shanghai, in its golden years of the first half of the twentieth century, is where Paul French, the New York Times bestselling author of Midnight in Peking (2012) and City of Devils: A Shanghai Noir (2018), returns to in his latest book, appropriately entitled Destination: Shanghai. An accessible account of the era, French’s Destination: Shanghai recounts eighteen vignettes of foreign sojourners in Shanghai during the twentieth century, some of them familiar, others decidedly less so.

The premise of French’s exploration of visits or spells of residence by foreigners in Shanghai in Destination: Shanghai, whether seeking adventure, heralding the beginning of a life in exile or in an attempt to escape their past, is to “reflect the multitude of experiences and interactions foreigners had with the city” (p. 11). It is not clear, however, that the book’s cast of international characters, drawn from all over the Western world, and arriving in Shanghai in search of either fame or fortune, provides a useful frame through which to analyse twentieth-century Shanghai, especially when compelled to navigate the geographical magnetism of the city itself. The result is a summary of Western characters set against the backdrop of Chinese history, which feels at once jumbled and inconsistent. Despite this, it is a scintillating tribute to a city that French is clearly well acquainted with, filled with studious observations, such as Lu Xun’s regular visits to the left-leaning Zeitgeist Bookshop,[i] which are sure to please even the most punctilious aficionados of Shanghai.

Individual sections, such as the chapter on Hollywood’s golden couple Mary Pickford and Douglas Fairbanks’s eventful visit to Shanghai in December 1929 amid the Nationalist government’s censorship of The Thief of Baghdad for its portrayal of Mongolians are immersive and highlight the early rise of celebrity culture in the city, alongside the development of China’s fledgling cinema industry. Elsewhere, two central biographies on playwright Eugene O’Neill and American poet Langston Hughes, whose respective sojourns in Shanghai took place within five years of one another, are compelling, their successful rendering owing much to French’s engaging prose.

Some of the characters to whom French dedicates his chapters have a connection to Shanghai that is rather tenuous. There is an entire section, for example, on the infamous English occultist Aleister Crowley, even though he appears to have only fleetingly stopped over in the city in late April 1906. The records of Crowley’s visit, by French’s own admission, are scant, and are supported primarily by Crowley’s own account contained within his somewhat revisionist “autohagiography”. When considering the reliability of a first-person source, particularly one as powerfully contradictory as Crowley, subjectivity and inconsistencies are factors the author needs to take into account. Crowley’s inclusion among an otherwise illuminating assortment of characters who pass through Shanghai comes across as more provocative than particularly original or insightful.

It is, however, testament to French’s impeccable research that most of the chapters in Destination: Shanghai focus so enthusiastically on bringing to the fore the more marginalised voices that passed through the city, such as the Viennese singer and actress Lily Flohr who, “like so many Jewish entertainers, was forced to leave Germany under the Nazis”. Much credit is also due to French’s uncovering of Shanghai’s overlooked Roma community who, despite their sizable contribution to the city’s renowned entertainment scene in the late 1930s and 1940s, have, until now, been almost completely overlooked by historians. For this reason, the book can be forgiven for overlooking some notable Shanghailanders, of whom much has already been written, such as English playwright Noël Coward, who penned Private Lives whilst sequestered in the Bund’s famed Cathay Hotel (now the Fairmont Peace Hotel) in 1930, or American socialite and New Yorker correspondent Emily Hahn, who appears only fleetingly in reference to André Malraux.[ii]

Other reviews of Destination: Shanghai highlight the general absence of Chinese source material. Such concerns, whilst relevant and necessary in scholarly approaches to Chinese historiography, can be somewhat set aside by the book’s focus on Shanghai’s international community and it is perhaps the constraints of the quasi-biographical genre in which French has framed his book that these perspectives cannot be more fully realised. In future instalments of his projected Destination series (tentatively proposed as focusing on Peking, Hong Kong and Singapore), it might be more fruitful to frame the stories contained within by focusing on the vicissitudes of the cities themselves and using this as the organising theme around which the biographies contained within the book’s overarching narrative revolve.

For the casual reader on China or, indeed, anyone interested in the miscellaneous cast of international characters milling around Shanghai in the early decades of the twentieth century, there is much to enjoy in Destination: Shanghai. The breadth of French’s research into the world of twentieth-century Shanghai is also evident throughout the book and is skilfully executed to tell fresh and interesting stories of one of China’s most alluring cities.

[ii] Though the author himself notes that Coward and his exploits in Asia are likely to appear in a future Destination book.

Ronald Torrance is a PhD candidate in English at the University of Strathclyde, Glasgow. His research interests include modernist and postmodernist Chinese literature (especially Lao She, Zhang Ailing and Mo Yan). He is also interested in contemporary Chinese writers such as Ma Jian, Ge Fei and Yan Lianke. He is currently working on a thesis focusing on reflections of significant historical events in contemporary Chinese fiction. He is published in the Europe-Asia Studies journal and the Journal of the British Association for Chinese Studies. He is currently based in China after graduating with a Master of Letters (MLitt Literature, Culture and Place) in 2015 and a BA (Hons) in English and Human Resource Management, both from the University of Strathclyde.