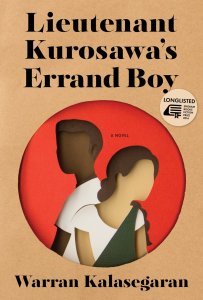 According to Kalasegaran, the novel was written while he was “studying at the Graduate School of Public Policy at the University of Tokyo.” Previously, he had earned a bachelor’s degree in politics from the University of Warwick. Lieutenant Kurosawa’s Errand Boy benefits from this academic background and training, and it shows a clear attempt to adhere to historical truth within its narrative. And unlike a typical novel, Kalasegaran’s book features a bibliography of sources. Apparently, he read a number of works around the topic, ranging from biographies (Lee Kuan Yew and S.R. Nathan) to books on Japanese culture and history.

Yet, as a work of fiction, there is much to be desired from Kalasegaran’s novel. Ideas are often raised and too briefly elaborated. Just when one expects more exploration of a concept, Kalasegaran quickly abandons it in favour of other threads. Consequently, the novel feels like an unfinished manuscript, caught in the tendrils of a writing workshop.

The novels begins by explaining that it will be told from the perspective of Karnan (the titular errand boy), who breaks the fourth wall by telling us that his “grandson who is writing this down on his foolscap paper tells me that I cannot talk like this.” Kalasegaran then takes the opportunity to offer meta-commentary on modern day society, in contrast to the world Karnan grew up in:

But I have had more salt than my grandson has had rice. He doesn’t know oppression or division, militarily and hierarchically enforced, where the colour of your skin and the employment of your father decided from birth where you lived in a brown congested room in a demarcated zone called Little India.

On first blush, this particular snippet comes across as a mature and considered opinion. Yet, Kalasegaran never revisits this angle—it is the first and last time readers are entreated to such societal commentary. In fact, Karnan’s “grandson” is never mentioned again. This robs the observation of any weight or significance. Instead of being a well-placed and thought-provoking interlude, it becomes an indulgent and lavish use of commentary for the sake of it.

Unfortunately, Lieutenant Kurosawa’s Errand Boy is often guilty of such missteps. For instance, Karnan consistently mentions his deceased father (whom he refers to as appa), when reminiscing about the time they had spent together. It is apparent that within the context of the novel, it is the loss of Karnan’s appa that kick-starts the entire tale. Yet, we are not shown why this relationship matters to Karnan. Instead, Kalasegaran, in a rather lazy fashion, simply gives us an underwhelming explanation. At the end of the first chapter, Karnan moans the absence of his father—”As much as I hated Appa, I missed him very much too.”

Though a reader could probably assume that a young child would miss his father, this narrative decision still comes off as odd and undeveloped. It feels like an attempt to cash in on a plot trope—an abandoned child seeking a father figure—without doing the work of truly explaining what makes Karnan special. After all, he is the titular character and protagonist, and it might have been beneficial to devote a few more pages to his life with his father, prior to the Japanese Occupation. Sadly, the novel’s hefty responsibilities (such as balancing two storylines in two different timelines) squashes this possibility.

This is infuriating, because there is so much potential within Kalasegaran’s work. Setting Karnan’s story in war-torn Singapore provides a rich and fertile source of creativity, and the confluence of war, politics and relationships makes it a complementary fit for Kalasegaran’s dramatic intentions. Unfortunately, instead of being a testament to adapting the right source material, Lieutenant Kurosawa’s Errand Boy becomes a cautionary tale on how one ends up achieving nothing when trying to do everything.

Besides Karnan’s storyline, which is set during the Japanese Occupation, the novel also focuses on Papatti, a Chinese girl who has been adopted by an Indian family. The novel alternates between Karnan and Papatti, until both storylines eventually converge. At first, Papatti’s narrative is promising and riveting. And, as it is set amidst the racial tensions of post-colonial Singapore, her unique background could been a strong starting point for uncovering Singapore’s cultural tapestry. Yet, Kalasegaran never really taps into this.

His opening chapter on Papatti feels like it comes straight out of a Balli Kaur Jaswal novel. One can feel the themes and tensions that Jaswal often has often explored in works such as Sugarbread coming off the page. Papatti’s attempt to negotiate her role as a Chinese girl growing up in an Indian family, coupled with her attempt to gain an education for herself, plants the seeds of a three-dimensional character. Nonetheless, Kalasegaran proceeds to squander this, in favour of a romantic subplot. The remaining chapters devoted to Papatti involve her prospective suitors trying to win her heart. This comes off as discordant and jarring. We’d started off with a young girl attempting to forge her own identity among the competing forces of society and family. But Kalasegaran never really follows through on this particular narrative arc. Instead, Papatti is relegated to a passive object of affection, to be wooed and adored by her admirers.

Indeed, this comes off as rather irritating at times, for example, when Papatti regresses to a passive and meek spouse, desperate to gain her husband’s attention near the novel’s denouement. Though one could argue that the novel is titled Lieutenant Kurosawa’s Errand Boy, and as such would have logically spent more time on Karnan, it still does not excuse Kalasegaran’s poor handling of Papatti’s arc.

This is not to say that the entire novel is irredeemable. There are aspects in which Kalasegaran excels, particularly surrounding the authenticity which he likely derived from his academic research. For instance, Kalasegaran achieves the tenuous balance between a war drama and literary realism:

A dark military jeep swerved past Yamashita and me and lurched to a halt inside the portico. Four soldiers unloaded a white woman, unconscious, hands and feet bound, mouth taped. A soldier shouted, and in unison they lifted her up the stairs and carried her into the building. The jeep drove away, and after its dust settled and the resplendent white doors closed behind the white woman, it was as if nothing had happened. Everyone went about their day again. She wasn’t just forgotten; she had never existed.

Here, Kalasegaran’s strengths are on display. By employing simple, clear and concise prose, he effortlessly captures the horrendous normalising of brutal acts in times of war. Sometimes, the most depressing elements of war need not be confined to conventional violence and conflict. Instead, it is the repressing of one’s conscience and morality out of fear and a desire to survive. Within this short episode, Kalasegaran manages to capture the reprehensibility and lack of empathy that stem from a civilian’s helplessness in times of war.

Sadly, such moments are undercut by the author’s attempt to introduce levity and wit. For example, Papatti is later accosted by several loan shark runners posing as policemen. Kalasegaran’s odd expression feels clunky: “The police turned out to be real, while the fake policemen really did turn out to be loan shark runners. Karnan and Arjun dissuaded the real police from hauling Papatti to the station to take down a real statement.” The continuous repetition of the term “police” comes off as clumsy and crude. It is quite easy for the reader to grasp what exactly is going on, yet Kalasegaran unnecessarily circles around the same point, making it confusing.

There is probably a better version of Lieutenant Kurosawa’s Errand Boy to be written, and Kalasegaran displays some promise as a writer of historical fiction. Specifically, he excels when it comes to portraying the normalcy of life during war. Essentially, he has an uncanny eye for capturing historical events in an enticing and documentary-like manner. It is in areas such as characterisation and narrative construction where his novel falls flat.

Kevin Tan Kwan Wei currently contributes articles to Your Commonwealth, a youth blog supported by The Commonwealth Youth Programme. He has served as a volunteer judge for The Queen’s Commonwealth Essay Competition, and is one of the inaugural participants of the Young Critics Mentorship Programme. He was recently awarded the Leading Change Journalism Bursary 2017 by the Queen Elizabeth Diamond Jubilee Trust.